Those who are part of my Motley Crew have already seen these pictures but I thought I'd share with everyone else. A fan who has a production company is making a video trailer to celebrate the re-release of my pirate series: Legacy of the King's Pirates. She sent me some photo shoots from their initial session.  I couldn't believe she's using live models in costume!! SO COOL!!   I can't wait to see the end result. I'll post it when I do

For some reason, video trailers really excite me. I love seeing my characters come to life, even if it's just for a few seconds. :-) 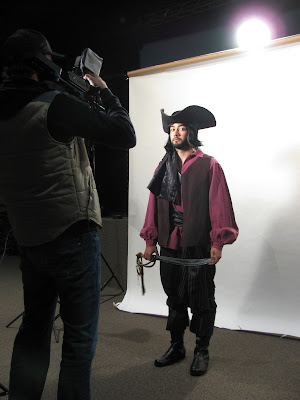 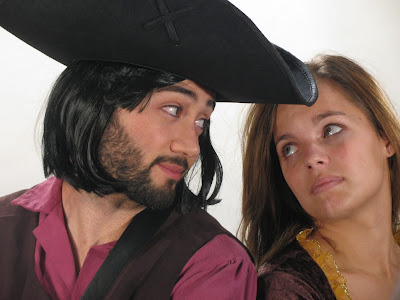 Writing news:  I hope to be done with the first draft of Forsaken Dreams by next week.. maybe the week after. My first draft is complete garbage. If you read it, it would make no sense. It's basically a right brain dump while my left brain is stunned into a catatonic state. LOL.  Sentences are all in fragments.. there are missing dialoge tags, notes to myself about things I need to add or things I need to researchm and terrible misspellings!  I'll give you a sample here:

Nicholas opened his bible and began to read:
Fill in words
But the words sounded hollow in Eliza’s ears. Hollow like the empty threat of thunder in the distance. What could any storm do to them now that they ahdn’t already suffered in the first storm and now in this next catastrophe. that ethereal mist had dropped a deadly disease upon the ship. How or why, nobody knew. Three days later, with over half the passengers and crew sick, these two precious lives had slipped away.

This is just the guts of the story. It's not pretty but at the end I know the plot of the entire novel and for some reason, that's a huge relief to me.  Next step? More research, filling in blanks and places I left for later, spelling, adding emotions and dialogue tags (those are the "he said, she said" things)  and generally, making it pretty.

I pray everyone had a great Thanksgiving!!!
Posted by MaryLu Tyndall at 4:00 AM