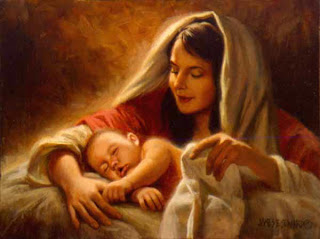 Merry Christmas!!  I hope everyone had a wonderful day yesterday celebrating our Savior's birth!!  I pray you and your family took a moment to contemplate the awesome sacrifice and miracle of Jesus's birth and to thank Him for all He's done.

Before the Virgin birth, Jesus had been quite familiar with planet earth. We know Christ made many appearances in the Old Testament. He would appear and then disappear, not limited by time and distance. He was the One who appeared to Abraham in Genesis 18 and allowed him to intercede for Sodom and Gomorrah. He appeared to Moses in the burning bush, calling Himself 'I AM'. He appeared to Joshua as Captain of the Lord's army and Joshua worshipped Him before Jericho, and He was the 4th man in the fiery furnace keeping Shadrach, Meshach, and Abednigo safe, and many other times.  Yet when Jesus appeared in the Old Testament, He appeared in temporary human form.

However, there had been planned from before creation, a time when Jesus would appear on earth not in temporary form, but inhuman form, a time when he shrugged off His Godly robes and became mortal so that He could die to save us all.

He emptied Himself and took upon Him the form of a servant (human), and was made in the likeness of men. And finding Himself fashioned as a man, he humbled Himself..." (Philippians 2:7-8)

"For truly He did not take upon Him the nature of angels, but He took on Him the seed of Abraham (became a Jewish man)" (Hebrews 2:16)

What boggles my mind is that Jesus made this choice of his own volition. He wasn't coerced, commanded, or cajoled. He wanted to come and die to save us.

Another thing that boggles my mind is the incredible wisdom of God.  He needed a Savior who was both human but not tainted with sin. Therefore he couldn't have him born through a man because the bloodline flows through the sperm, not the egg, and if Jesus had been born through a man, he would have inherited the fallen sin nature of man. But God had to make Jesus human, so the only way to do that would be to have God's life impregnate a female egg. That way, Jesus's blood would be pure, untainted by sin.

"For the Holy Spirit will come upon you, and the Power (Christ) of the Highest (the Father) will overshadow you; therefore that Holy thing which will be born of you will be called the Son of God." (Luke 1:35)

And only a man untainted by sin could offer his life as an acceptable sacrifice for the world. Amazing!!

And thank God for that! Because of His holiness, his purity, his restraint, His selflessness, His sacrifice, and His love, we can all rejoice, knowing we are rescued, saved, and we have an eternal destiny beyond our wildest dreams!
Posted by MaryLu Tyndall at 4:00 AM