"And there were in the same country shepherds staying in the field, keeping watch over their flock by night. An lo, the angel of the Lord came upon them, and the glory of the Lord shone round about them, and they were very afraid.
And the angel said to them, 'Fear not, for unto you is born this day in the city of David a Savior, who is Christ the Lord..." (Luke 2:8-11) 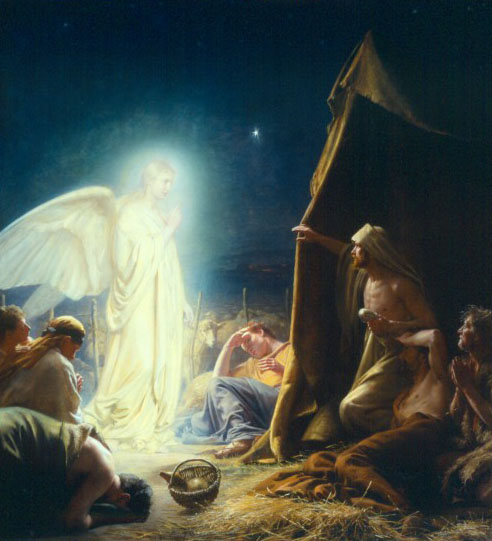 "And suddenly there was with the angel a multitude of the heavenly host praising God and saying; 'Glory to God in the highest, and on earth peace, good will toward men.'"


Did you know that Heavenly Host means Army? God sent his army to earth to announce the birth of His Son! Why an army? Seems a little intimidating! No wonder the shepherds were frightened!!   I believe God the Father was calling for a peace treaty between Himself and man.  The terms?  "Peace on Earth. Good will toward men"

God is saying He will call off the army of heaven, and will have peace and good will toward men, because of His Son who will reconcile all things back to Him has been born!

We are still living under the terms of that peace treaty right now. Accept the terms, Accept the Son and live in peace with God!

Merry Christmas to all my blog followers, dear friends, and readers!
Posted by MaryLu Tyndall at 4:00 AM