We can trust our ship's forerunner! 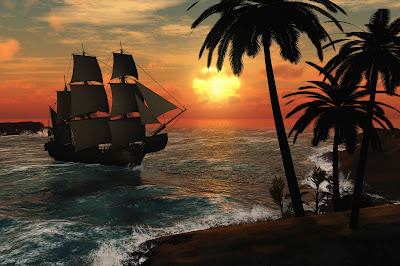 This hope we have as an anchor of the soul, a hope both sure and steadfast and one which enters within the veil, where Jesus has entered as a forerunner for us, having become a high priest forever according to the order of Melchizedek.  Hebrews 6:19-20

I love the analogy of hope as an anchor, don't you? When a ship's anchor was firmly embedded in the seabed, it was going nowhere. No matter how many storms came and went. No matter how badly the ship was tossed to and fro, if its anchor was secure, it did not move.

It's hard to imagine that hope can be such a sturdy anchor, but hope is a very important thing to have. Have you ever met a person without hope? How about a person with tons of hope? People who are full of hope are happy, excited about life, almost annoying in their exuberance!  But take that hope away and their happiness begins to fade. Take more hope away and they become just satisfied. With even less hope, they become sad. People who are depressed have very little hope, and finally people who have zero hope usually end up taking their own lives.

But what is the hope this passage is talking about? Earlier in Hebrews 6, Paul warns people about falling away from God and the faith. His words are quite strong and even harsh and he may have even been concerned that he'd made people unduly frightened, so he continues in Hebrews 6 talking about God's faithfulness and promises


In the same way God, desiring even more to show to the heirs of the promise the unchangeableness of His purpose, interposed with an oath, so that by two unchangeable things in which it is impossible for God to lie, we who have taken refuge would have strong encouragement to take hold of the hope set before us. Hebrews 6:17-18
So what is the hope? It is God's promise to make us His heirs. His promise to save us and bring us into eternity.
In ancient times, when a ship was sailing into the harbor of a port city, one of the sailors would get into a smaller vessel, take the anchor with him and go ahead of the ship, navigating through all the shoals, reefs and other ships to find a good, safe, strong place to drop the anchor. He was called the forerunner. Only through his skill and expertise could the ship make it's way through all the dangers in the harbor and find good strong anchorage.

Jesus is our forerunner, guiding our ship through the trials and dangers of this life into the safe harbor of Heaven. He has already dropped our anchor into the immovable rock, which is Himself, the Rock of ages. This anchor can never be moved, jarred, broken, or split. It is eternal. Now, all we have to do is follow the rope tied to the anchor as it guides us through the path our forerunner has already laid out for us.

Just think about it, your anchor is already set firmly in the Rock of Heaven! So no matter what storms, what shoals or reefs lie ahead, just keep following the path of the forerunner and you will find anchorage in eternity.
Posted by MaryLu Tyndall at 4:00 AM