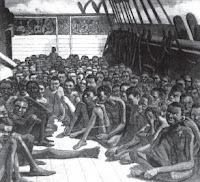 Don’t you know that when you offer yourselves to someone as obedient slaves, you are slaves of the one you obey—whether you are slaves to sin, which leads to death, or to obedience, which leads to righteousness? Romans 6:16
No doubt you've heard the horrors of the slave ships which transported slaves from Africa to the Americas in droves during the slave trade years. In order to save costs and make a bigger profit, these poor men and women were crammed together in the hold, some in tiny boxes, others chained to planks, so the owners could bring over as many as possible in one trip. Often times they were shoved so tightly together that they couldn't move or even lie down. Heat and sickness and uncleanliness normally killed at least a third of them before they reached shore.  The owners were vicious, cruel taskmasters who cared not a whit when one of them died.

This is a good picture of our lives before Christ. Satan is the ship captain, we were his slaves, and he was transporting us to hell. And I dare say, he enjoyed seeing us suffer!  The Bible says that we become slaves of whoever we choose to obey.  We may not have wittingly obeyed the devil, but whenever we chose to do wrong, to satisfy our flesh, to disobey God, the chains around us tightened even more.

In Romans 6, Paul gives a great discourse on sin, slavery and freedom in Christ.  Before we knew God, we were all on the slave ship. We had no choice but to sin. It was our nature. Just think of a tiny child. The baby is innocent when he is born, but how long does he last in that state before his human nature takes over? Before he cries to selfishly demand that his needs be met? Before he hits his brother or steals a toy?  We are all born on the slave ship. 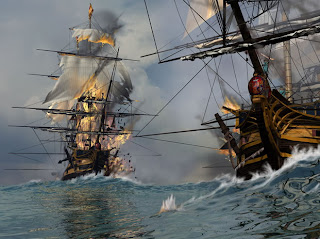 But God didn't leave us there! He sent another ship to rescue us! The ship, Salvation, captained by Jesus Himself. He delivered a mighty broadside to Satan's ship, crippling it, and then He boarded with swords blazing. He opened the hatch and called for any who wanted to come with Him, to come.

We are no longer slaves to sin. For when we died with Christ we were set free from the power of sin.  Romans 6:7

He set us free! He took us aboard His ship and now we serve Him.
Once you were slaves of sin, but now you wholeheartedly obey this teaching we have given you.  Now you are free from your slavery to sin, and you have become slaves to righteous living. Romans 6:17-18

Slaves to righteousness? So we are slaves again? Hmm.. that doesn't sound good. I don't want to be a slave at at!  But in truth, we will be a slave to either Satan or God. The choice is yours. 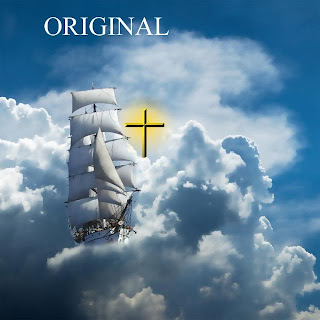 If I'm a slave to righteousness and to God, then why do I still sin? We all still sin because God is a gentleman and on His ship, we have a choice. We can still sin or we can choose not to. If we sin, we still get to remain  on God's ship, but our character will never improve and we will never get out of the bilge and the stink in the hold. We will never get promoted to work on the deck above in the fresh air. So, how do we get better?  It's a process called Santification. It doesn't happen automatically as some Christians believe. God doesn't just change us instantaneously.

You must offer yourself, you must obey, you must yield. The choice is up to you.
So don't be a slave to sin anymore. Yield to God in ALL things, whether it be suffering or hardship or trials or temptations. Get out of the stinky hold and become a slave to righteousness!
Posted by MaryLu Tyndall at 12:30 AM