Tis a Writer's Life for Me! Action Scenes!

Progress on Escape to Paradise:  I finished Chapter 8 of my second draft this week!  That's out of 35 chapters so I have a ways to go, but at least I'm making progress.

One thing that slowed me down this week was an action scene. You may think those are easy to write becaue there's a lot going on, but they are hard to write precisely because there's a lot going on!  So, how do you write a good action scene?  By action I'm talking about something major is happening.. and earthquake, a war, a tidal wave, a fire, gunshots, an assault!  In this case, my rebel ship was being chased and fired upon by a Union frigate. 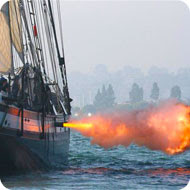 The keys to writing a great action scene that will grip your reader are, in my opinion:

1. Get into the head of your point of view character (the one who's experiencing the scene), close your eyes, and ask yourself after you write each paragraph the following things.

The point here is to incorporate all your character's senses. Put yourself on that ship being chased by a frigate. When they fire their cannons at you, what do you do? What are your thoughts? What is your body doing? your heart? your blood? Are you numb? Can't breathe? If you die, what are your regrets? Who do you leave behind? Do you fear death? Can you smell the smoke? Do you hear screams? Did the shot hit the ship? Can you hear the wood snap? The captain yell?

Repeat these questions often during the scene to make sure you're staying in character and you haven't drifted into describing the action rather than being right in it! 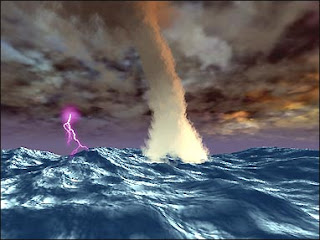 2. Use the setting to enhance the stressful mood.

No matter if you're on land or sea, or in a house, setting is a great tool to enhance any scene. If you are outside, you can change the mood instantly by having a storm rush in.. the wind pick up, a chill overcome your character. In a house, the power can go off, a window break, a dog howl... And of course on a ship, the spray stinging your face, the wind clawing your skin, the mighty swells rising and falling..  Use your setting!

3. Use other character's expressions and reactions to convey stress. 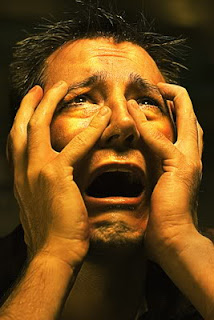 4. Use short, choppy, sentences to convey stress and action.

This is a great trick of the trade. Long, drawn out sentences give a feeling of comfort and ease and a sense that you have all the time in the world.  Short, choppy ones give a sense of urgency, as in the passage below (taken from Escape to Paradise)


Perspiration slid down Eliza’s back. Her palms grew moist. The ship pitched over a wave. Her feet skipped over the deck. Above her, sails caught the wind in a boom nearly as loud as a cannon. She’d heard more than her share of the monstrous beasts on the battlefield. She'd seen the devastation they could wreak, but she had never been in the middle of a battle. Especially at sea.
The brig swung to port. Her timbers creaked and groaned and heaved as the ship tacked away from their enemy. The port railing swept up toward the sky. Eliza clutched it lest she tumble across the deck. Her mouth went dry. Why didn’t the blasted Union leave them alone? Hadn’t they done enough damage?

The ship righted again. Wind tore Eliza’s bonnet from her head, tossing it into the agitated sea. Strands of hair whipped her face. She brushed them aside just in time to see a yellow flame spear from the union ship.

“Hands down!” the captain yelled.