Tis a Writer's life for me! - Chapter endings! 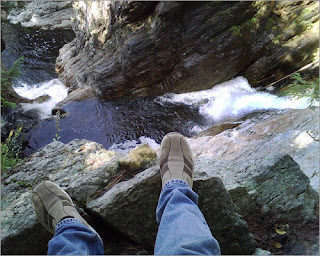 I love writing chapter endings!  Yes, I know I'm weird. Most writers have great difficulty closing out a chapter with something exciting and tense, something that makes the poor reader turn the page! But for me,  I love creating those cliff hangers!  I love torturing my reader into never being able to set the book down and having to stay up all night because each chapter closes with a situation that would forbid them to sleep until they know how things turn out! What a beast I am!!

I like to think I accomplish that task most of the time. But how do you do it? How do you always end a chapter with something dramatic?. I mean, let's face it, maybe there's nothing really going on at that moment in the book that's overly tense.  Here's some ideas that may help you with examples from my own books.

End with the worst thing possible that could happen to your character
(In this case, losing his father’s ship to a lady pirate!) (The Red Siren)
I thank you, Captain, for your chivalrous rescue.” The woman pointed her pistol at him and cocked it with a snap. “But I believe I’ll be taking over your ship.”

In a romance, have your heroine find the hero talking intimately to another woman or visa versa
(The Reliance)
Merrick sat at a table in the back, surrounded by a band of filthy pirates. His ebony hair hung to his shoulders, and his familiar baldric crossed his thick chest. On his lap sat a beautiful, dark-haired woman. He laughed then buried his face into her neck, kissing her.

Charlisse’s heart shattered and crumpled like sand to the floor.

Play upon the character’s worst fears
(The Restitution)
Isabel bolted up in bed and glanced over the shadows in her room. Her eyes darted to the cradle beside her. It rocked back and forth. She peered inside. Her baby was gone.

Create a moment of extreme embarrassment
(The Blue Enchantress)
Hope’s eyes widened. She flung a hand to her mouth, then bent double and lost the contents of her stomach all over his boots.

Unexpected action
(The Raven Saint)
Rafe opened his mouth to tell the exasperating woman that God was on no one’s side, but her eyes fluttered shut, and she collapsed in his arms.

Have an unexpected or long lost character enter the room
(Background: A man has just entered the tavern where Hope is waiting. It is the man who sold her as a slave on St. Kitts.)  The Blue Enchantress
His satin waistcoat and breeches bespoke either great wealth or ostentatious pride, and he perused the room with haughty disdain as if he owned the place.
Hope panted out a ragged breath. “Lord Falkland.”.

End with a threat
(The Raven Saint)
Rafe threw back his shoulders and lengthened his stance to cover up the fear tying his stomach into knots. He swung back to his father whose blue eyes glowed with cruel deception. “What is this about?”
His father grinned. “This is what I believe you call a mutiny.”

End with an action that could end badly
(Background: Hope is being sold as a slave to a slimy merchantman) (The Blue Enchantress)
As the man counted out the coins into the auctioneer’s greedy hands, Hope reached for the sword.

End with a promise of disaster.
(Surrender the Night)
A petal loosened and floated to the floor by her feet. When it struck the wooden planks, a heavy drape of foreboding fell upon her. Something terrible was about to happen. Something that would keep Alex from her forever.


End with a promise of action
(The Blue Enchantress)
Clenching his fists, Nathaniel resolved to speak with Hope tonight, for he could no longer deny his feelings. He must tell her he loved her.

End with violence
(The Falcon and the Sparrow)
She halted behind him, knees quaking. Her fingers gorged with blood. Gripping the candlestick with both hands, she hefted it as high as she could. Then, squeezing her eyes shut, she tensed her arms, readying herself to swing with all her might.

A daunting realization:
(The Raven Saint)
Sometime in the middle of the night, a lurid thought seeped into Grace’s mind, jarring her consciousness. A picture of a ripe yellow mango danced through her mind. Lifting her hand to her throat, she gasped as tears of shame burned behind her eyes. I am a thief.

End with a question (Surrender the Heart)
Footsteps stomped. Marianne held her breath.
A half circle of light advanced upon her shoes, then crept up her legs.
“What have we here?”

Ominous foreboding
(Surrender the Heart)
It was the only hope Noah could cling to as he swung over the bulwarks and dropped into the boat that would take him, his men, and Miss Denton to a fate worse than death.

End with a shocking statement
(The Falcon and the Sparrow)
Once she stepped over the threshold of this house, she would no longer be Dominique Dawson, the loyal daughter of a British Admiral. She would be a French Spy.

End with a vow
(The Red Siren)
Everything inside of her screamed in defiance. She would not serve a God who had allowed such suffering in her life.

An ultimatum
(The Red Siren)
“You will marry me.”
Yanking her hand from his, Faith retreated. “I will not.”
“Then I shall be forced to turn you in for piracy.

Okay, now it’s your turn. If you're a writer, give me your best chapter hooks! If you're not, tell me which of these really impacted you or better yet, list some from a book you're reading. They can either fit into one of these categories, or you can create additional ones. (I’d love to have you add new ones to my list!)
Posted by MaryLu Tyndall at 12:30 AM