Are we doing church right?

Is it just me or is there a nagging disconnect between what I read church was like in the New Testament and what we see today in Western Culture?   Is it just me or do you wonder if there's something more to being a Christian other than just going to church on Sundays, reading your Bible, praying, and trying to be good? 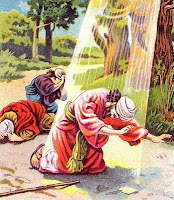 I remember years ago when my husband had a "road to Damascus" type experience with God and he got immediately saved, saw visions of demons and angels and was so excited about God and so filled with His Spirit, that he spent every evening reading the Bible from cover to cover!  I remember him asking me the question. "So now what?"

It's the same question most of us ask after we have a life-changing encounter with God. How can we go back to living our normal every day lives?  How can we do that, knowing what we now know! Knowing that this world, this life, isn't the end. Knowing that God loves us so much that He made the ultimate sacrifice of His Son to rescue us and give us eternal life?  I mean, it's so exciting!! It's so incredible? How can we ever be the same?

I had no answer to give him.  For me, I just did the things I saw other good Christians doing (see above list). I did the things I was told to do until eventually I blended in with everyone else in the world as I went to work and raised a family and went about my business. Trouble is, that's just what my husband did too.  But is that all there is?

Then I read the New Testament, in particular ACTS and I'm in awe of the lives these early Christians led.
Here are some differences I see from today's church

Can you think of more?  I realize these early Christians didn't have the funds to build churches and later on, they were hunted down and persecuted. But I've also heard currently in countries such as China and India, secret house churches are on the rise and Christianity is exploding.  Your thoughts?