Batimore, a nest of Pirates!

If you've read my Destiny series, you probably already know how important the city of Baltimore was to the American cause. 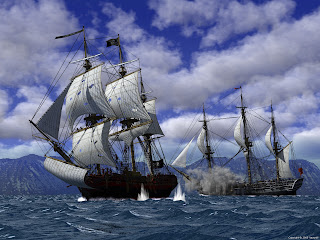 Baltimore sent out more privateers and letters-of-marque than any other city. Her captures were nearly double those of all the US vessels combined, and, in fact, nearly one-third of the total captures made.

Baltimore sent forth 61, or nearly one-fourth of the privateers and letters-of-marque. These captured 476 prizes, or more than one-third of those taken by privateers. If to these be added the 41 prizes taken by Baltimore men in command of government vessels, the 19 captured by Commodore Rodgers' squadron, the 18 by the U. S. frigate Essex, Captain David Porter, and the 4 taken by the Chesapeake, there will be a total of 517 captures made by Baltimore vessels and men, which is not far from one-third of the entire number taken.

No wonder the British referred to Baltimore as a "Nest of Pirates"!

So, brilliant sages, do you know what the difference between a privateer and a letter-of-marque is?   Leave a comment and see if you're right!