Can we change our culture for Christ? Or is it too late? 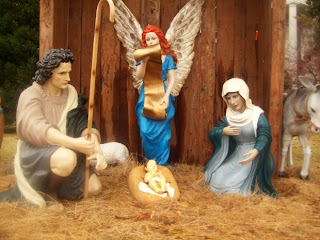 How did an atheist activist, who once sued the city government in Athens Texas to have a Nativity Scene removed from the town square, do a 180 and become a follower of Jesus and want to become a preacher?

The answer is LOVE.

Despite his actions against the religious symbol, when residents found out that Patrick Greene was suffering from a serious eye condition that could lead to blindness and he was forced to retire, Christians came together to raise funds for him and his wife to purchase groceries after he fell ill.
They offered him $400 for groceries and other needs. This simple gift, which was given despite ideological and theological differences, apparently caused Greene to re-think his atheistic inclinations. The Christian Post recaps his transformation from non-belief to an adherence to Jesus Christ:


“There’s been one lingering thought in the back of my head my entire life, and it‘s one thought that I’ve never been able to reconcile, and that is the vast difference between all the animals and us,” Greene told The Christian Post on Tuesday, as he began to explain his recent transformation from atheist to Christian. The theory of evolution didn’t answer his questions, he says, so he just set those questions aside and didn’t think about them anymore.
But when the Christians in a town that had reason to be angry with him showed him a gesture of love, he began reconsidering his beliefs altogether. He eventually began to realize that evolution would never have the answer to his questions, he says, and it was at that time he began to believe in God.
“I kind of realized that the questions I [was] asking you just had to accept on faith without doubting every period and every comma,” he said. He later began studying the Bible, both the Old Testament and the Gospels, and also discovered his belief that Jesus is the Son of God.

Greene says his wife, who remains an atheist, is surprised by his conversion. That being said, he claims the two are able to cope with their differences without putting one another down or bashing the other’s beliefs.
Perhaps more surprising than Greene’s conversion — which was unexpected considering his past activism — is his plan to consider entering ministry.

It seems that turning the other cheek as the Christians did, while showing love can, indeed, have a positive impact.

Excerpts taken from article found at  The Blaze