Did Jesus descend into Hell?

I know. I know. Controversial subject, but hear me out.   As I'm writing this post, today is Good Friday, the day Jesus was hung on the cross to redeem all of mankind from Satan's grip.  It's a solemn day. A day to remember and reflect all that the Son of God did for us.  Many of you have watched the movie, The Passion, or at least tried to watch it. As horrible as that movie depicted the crucifixion, the physical torture that Jesus endured was beyond anything we could imagine.

But that wasn't the worst of it.

You may have heard it said that it was God's ultimate rejection of Jesus that actually killed Him and broke His heart. I agree. When the sins of the entire world, past, present, and future were laid upon Jesus on that cross, Father God turned His face away from His Son for this first time in all of eternity. And Jesus felt it. He cried out in agony:

About three in the afternoon Jesus cried out in a loud voice, “Eli, Eli, lema sabachthani?” (which means “My God, my God, why have you forsaken me?”).  Matthew 27:46

Have you ever been rejected by someone you loved, trusted, someone you thought would always be there? I have. It hurts horribly.  Yet, the rejection Jesus felt was so much worse that that. He and the Father had been in constant communication and fellowship in a relationship closer than we could ever imagine since before time began. The loss Jesus felt was unimaginable.

My God, my God, why have you forsaken me?
Why are you so far from saving me,
so far from my cries of anguish?
My God, I cry out by day, but you do not answer,
by night, but I find no rest   Psalm 22 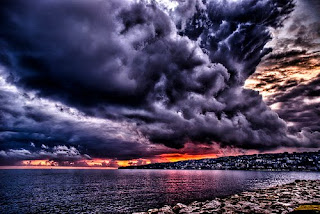 But that wasn't the worst of it.  It was much more than rejection. Jesus also suffered wave after wave of the full wrath of God for our sins while he hung there, all at the hands of His beloved Father. I can't imagine the horror of that!  Many of us know how much more painful a broken heart is than a broken bone.  Jesus suffered the worst of the worst kind of rejection.. the wrath, the punishment, the hatred of His Father, whom He adored.

But then Jesus cried, "It is finished."  And He gave up His Spirit. But then what?

“When He ascended on high, He led captivity captive, And gave gifts to men.” Now this, “He ascended”—what does it mean but that He also first descended into the lower parts of the earth? He who descended is also the One who ascended far above all the heavens, that He might fill all things. Ephesians 4:8-9

Jesus did descend into the lower parts of the earth, but not Hell. He descended into Hades, the holding place for the dead.  Why? For three reasons that I can find


Boy, would I have loved to be there to watch that!!   Afterward, Jesus's Spirit ascended into Heaven to await His resurrection.

But God didn't leave His Son there.

For You will not leave my soul in Hades,
Nor will You allow Your Holy One to see corruption.
You have made known to me the ways of life;You will make me full of joy in Your presence.   Acts 2

I am the Living One; I was dead, and now look, I am alive for ever and ever! And I hold the keys of death and Hades.  Revelation 1:18

I, for one, am glad Jesus is in possession of the Keys of Death and Hades!  Why does He need them? Because when He returns and sets up His judgement seat, He will release those departed souls who've been locked there through the ages and each one of them will stand before Him and give an account of their lives.

A sobering thought for those who never received His free gift of eternal life!