What is a Navy Press Gang?

If you're a history lover or have seen any of the Hornblower series, you may already know the answer to this question, though most movies and books do not give a completely accurate account of the practice.

Impressment was a brutal tactic in which the Royal (British) Navy would send bands of seamen, armed with cudgels, and led by a Navy lieutenant, onto shore to kidnap men and bring them aboard for service. Yes, you heard me right. Some poor fellow is simply out for a stroll or on his way to work or maybe heading to see his lady love, when a mob of men attack him and drag him on board a ship where he must serve the extension of that ship's commission. (which could be years!)   You see see why the press gangs were feared!

So what would prompt a country to do this?  Although the press gang seems to have originated in the thirteenth century, it was the Quota Act of 1795 that increased its occurrence. The Act forced every county in Britain to provide a certain number of recruits according to its population. Though civic authorities offered bounties and even freed criminals and debtors to fill the quota, they still did not have enough men.

But these gangs wouldn't just take anyone. They were looking for the following:
Men between the ages of 18 and 55
Not apprentices or gentlemen
No landsmen. The men must have some experience on board a ship.

So if you were a farmer or shopkeeper or tradesmen who had never set foot on a ship, you were probably safe. Or if you were part of the upper class or nobility. Or a woman, of course! 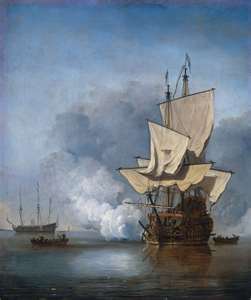 You were particularly vulnerable, however, if you were a merchant with vast experience at sea.  These men were often stolen right off their ships before they even made port!

Before you get too upset, once these men were made to "volunteer", they were treated like anyone else in the Navy. They were given training and pay and clothing and food. Whether they were happy or not about their new career, we may never know, though I imagine their emotions ran the gambit from furiously miserable to happy to have a job.

And just so you know, America never really picked up this practice at large, although individual states did practice impressment from time to time depending on the local law.