Charleston, a fortress walled in with a moat?

And you thought only fort-like walls and moats were meant for Medieval Castles?  Well, it may shock you to know that lovely Charleston, South Carolina, formerly known as Charles Town, was one of two colonial American cities that was surrounded by massive walls, bastions, batteries and a moat!  (The other was St. Augustine) In 1690, under constant attack by Indians, pirates, and the Spanish, the Charles Town Assembly thought it prudent to "build a sea wall fronting the Cooper River and to construct entrenchments, parapets, sally ports, gates, and drawbridges around the town."

Colonel William Rhett, a prominent citizen, was in charge of the construction. His house is located on the map below which shows the wall surrounding the city, along with the locations of each Bastion 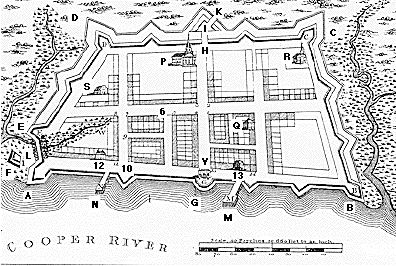 Midway between Granville and Craven bastions, Half-Moon Battery projected into the bay. It stood above the original Court of Guard. The Old Exchange building was built upon this spot in the mid-18th century. During the restoration of the Old Exchange in 1976, archaeologists unearthed a portion of Half-Moon Battery under the dungeon of the Exchange, which can still be seen today. (I've seen this exact spot when I visited Charleston a few years ago! Very cool)

The only way into the Charles Town fortress was over two drawbridges situated near the intersection of present-day Broad and Meeting Streets. Midway between the Carteret and Colleton bastions, the wall projected sharply to a triangular point. A visitor would pass through the outer wall by crossing a drawbridge on one side of this triangle at point K on the map above, only to find himself standing in a structure called "Johnson's Covered Half-Moon," situated in the middle of the moat, which presumably functioned as a sort of security check-point. A second drawbridge, labeled H on the map, then ushered the visitor past the inner wall into the city proper at point H on the diagram.

Amazing, eh?   The Walls and moats didn't last long, however. After a devastating hurricane in 1713, followed by huge growth in the city, the walls were dismantled around 1718.