Did the US ever occupy Mexico?

I've been hearing weird things lately from the media that the brutal, cruel United States is actually "occupying" Mexican territory, or what used to be Mexican territory. They claim that all of California, Nevada,  New Mexico, Texas, Arizona, Utah, and parts of Colorado originally belonged to Mexico and were stolen by the US and now occupied. 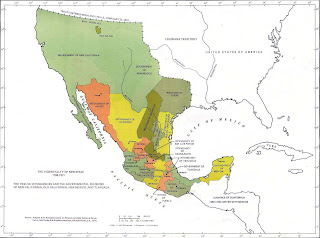 So, I thought I'd do some research and set the record straight. Now, mind you, I have nothing against Mexico or Mexicans. I am not racist at all. I simply want to reveal the facts.

Cortez conquered present day Mexico in 1519 and ruled much of Mexico as well as the disputed land in the US for 300 years.  This is why Mexicans speak Spanish. This entire area was called the Vice royalty of New Spain.

Mexicans fought and won their independence from Spain in 1821. However skirmishes between Americans living in present day US and the new Mexicans increased until in 1836, Texas declared it's independence from Mexico. This means that Texas was only considered part of Mexico for 15 years. Before that, it had been ruled by Spain for 300 years.

The treaty of Guadeloupe signed in 1848 called for these provisions
US would withdraw from Mexico, including Mexico city
US would get Southwestern US, including Texas, California, Arizona, New Mexico, Utah, Colorado

In addition, even though we WON the war, we agreed to buy this land from Mexico for $15 Million. We are not occupying Mexican land. We won it in war and then paid for it.

Oddly, this seems quite familiar to another country struggling with accusations of "occupying" territory they also won in war.  Israel.