Dolly Madison - a woman to admire! 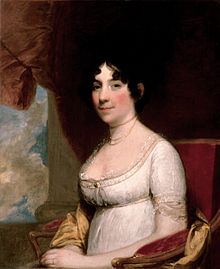 Dolly Madison is one of my favorite historical women. If you've read my book, Surrender the Night, you may remember her brief appearance as she defended the White House in Washington DC against an invasion of the British.  Can you imagine? Her husband is gone. The 100 men who were left to guard her have run off to fight. And she is alone with a group of servants making a stand against the the advancing British military.

But before we get to that. Who was Dolly Madison?  Born on May 20th 1768, Dolly grew up in a strict Quaker home, extremely devout and very religious. But it was her extreme social skills that won her a place among the elite in Washington. She was what we would call today a social butterfly, trained in all the social graces. She loved to entertain, always set the perfect table, knew the right thing to say, the right joke to tell at the right time. She as also an expert at decorating. All these combined to make her the perfect First Lady.  But what most people didn't realize was that she was also very brave.

While she waited for the British to descend upon Washington DC, unaware if her husband was even alive, and with the assistance of Jean P. Sioussa or "French John", her doorkeeper, she gathered as many of the irreplaceable items in the house she could. Things like papers, memoranda from the President's desk, silver, books, velvet curtains, even a small clock, stuffing as much as she could into a waiting carriage. Hanging on the dining room's west wall was a portrait of George Washington that Dolly had no intention of leaving for the British.  But the painting was encased in a heavy guilt frame and she couldn't free it. Finally it was French John who managed to free the painting in tact. When  Shipowner Jacob Barker and Robert Depeyster of New York stopped by to ask if they could help her, she handed the portrait over to them. Later that day, they deposited it for safekeeping with "a widow lady at a country house some distance from the road"

All day long she turned her spyglass in every direction "watching with unwearied anxiety, hoping to discover the approach of my dear husband and his friends, but alas, I can descry only groups of military wandering in all directions, as if there was a lack of arms or of spirit to fight for their own freedom" 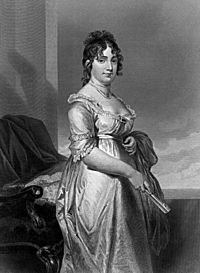 Soon after, James Smith, a freed slave who had accompanied Mr. Madison to Bladensburg (where the fighting was), galloped up to the house, waving his hat and cried out "Clear out! Clear out! General Armstrong has ordered a retreat!" He also bore a note from the president, directing Dolly to flee at once. Mayhem ensued. Dolly ordered her carriage readied and "passing through the dining room, caught up what silver she could crowd into her old fashioned reticule and then jumped into her chariot with her servant girl Sukey and Daniel Carroll who took charge of them; Jo. Bolin drove the over to Georgetown Heights."

Dolly often entertained her husband and several of his staff and military men for an afternoon meal. Even today, she had set the dining room table complete with silver settings and china and laden with all manner of exquisite fare. Unfortunately, it was the British troops who ended up enjoying the meal.
Posted by MaryLu Tyndall at 12:30 AM