Are we doing church right? Part 4

So far, we've been asking where our current Christian church traditions have come from.  And are they Biblical? We discussed where we got our Church Building and how influential Emperor Constantine was on some of our early traditions.  Today, I want to briefly list some of the people and groups throughout the centuries who had added to our current way of doing things.

Ulrich Zwingli, a Swiss Reformer - Replaced  the alter table with the "Communion" table from which the bread and the wine were administered and carried to the people in little cups on a wooden tray. 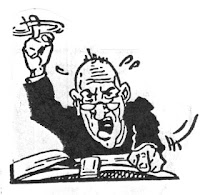 John Calvin (1509-1564) - stressed the importance of the sermon during the service, going so far as to say that each believer had access to God through the preached Word. Calvin believed most of the worship service should be led by the pastor from the pulpit, making the pastor the MC and CEO of the service.

(This is in direct opposition to what the Apostle Paul tells us in 1 Corinthians 12, that Jesus is the head of the church and that He speaks through His entire body, not just one member)

Martin Bucer (1491-1551) instituted the idea that one should be quiet and somber when entering the church building. This practice grew so out of hand that in Puritan New England, people were fined for smiling in church!

Puritans - gave us the long pastoral prayer at the beginning of the sermon, a prayer that could last up to an hour!  The sermon became even more important to the Puritans since they believed it was equivalent to God speaking directly to them. Hence, they would punish church members for missing the service by fining them or putting them in stocks!  Like the Catholics, Lutherans, and Calvinists before them, the Puritan order of worship was highly predictable, written out in detail and followed to the letter 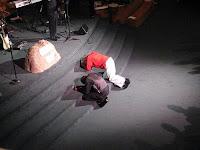 Methodists - brought loud singing to the service, but kept the Looooong pastoral prayer.  Gave birth to the "altar call"

George Whitfield (1714-1770) - invented the open-air revival meeting and made the sole purpose of preaching to win lost souls.  Instituted the use of emotional music to invoke a response from the people.

(While winning souls is a worthy goal, it was not God's sole purpose for his church, which was to have a relationship with His children and thus, make His presence more visible on earth) .

Charles Finney (1792-1875) believed that the sole purpose of a church service was to win converts by any means possible. He turned revivalism into a science and brought it into the church.  Many modern churches operate on this premise today. (Turning salvation into a procedure and process is unscriptural and takes the leading and prompting of the Holy Spirit out of the picture) 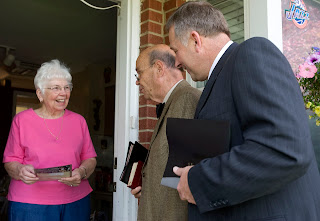 D.L. Moody (1837-1899) - introduced the music that played during altar call. Gave us door-to-door witnessing, evangelistic advertising, decision cards, the sinner's prayer. The church was seen as a gathering of individuals and not the corporate body of Christ

Aside from the above additions to the order of church, the worship service has changed little in the past 500 years. Basically the modern church service is officiated and directed by a pastor, the sermon is central and the people are passive. In essence, God's people have never broken free from the liturgical restraints they inherited from the Roman Catholics.

So what, you may say, I like the way church is run. I'm used to it. Comfortable. But  let's look at some of the negatives associated with our modern church service.


So, what do you think? I'd love to hear your thoughts