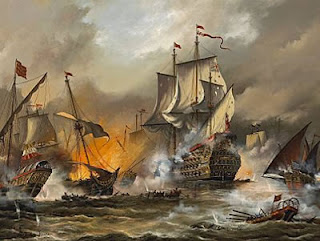 Some years ago, while doing research on pirates, I came across some interesting information about a group of Islamic pirates who sailed from the North African Berber states of Algiers, Tunis, Morocco, and Tripoli (the Barbary Coast).  These pirates were the scourge of the Mediterranean for years, capturing merchant ships and enslaving or ransoming their crews for wealth that made the Muslim rulers of these nations rich and powerful.

Though the Mediterranean was across the sea, America was not immune to these attacks. The Barbary pirates captured and held the crews of several of our merchant ships. Before the United States won it's independence from Britain, the Royal Navy protected our ships, as well as France under the Treaty of Alliance.  But after we became a nation, all bets were off!  On October 11, 1784, Moroccan pirates seized the American brigantine, Betsey, and Thomas Jefferson, the then US minister to France, sent  envoys to Morocco and Algeria to try to purchase treaties and the freedoms of the captured sailors held by Algeria. He was successful in part for Morocco  did sign a treaty with the U.S. on June 23, 1786 that formally ended all Moroccan piracy against American shipping interests.

But Algeria was another matter.  On July 25, 1785 they captured the schooner Maria and the Dauphin a week later. All four Barbary Coast states demanded a sum of $660,000 as ransom for the captured sailors.   Diplomatic talks ensued but no agreement was reached, leaving the crews of the Maria and Dauphin in captivity for over a decade, as well as other soon-to-be captured ships and their crews. In 1795, Algeria came to an agreement with the U.S. that resulted in the release of 115 sailors they held, at the cost of over $1 million. This was nearly 1⁄6 of the entire U.S. budget, and  was demanded as tribute by the Barbary States to prevent further piracy.


In March 1785, Thomas Jefferson and John Adams went to London to negotiate with Tripoli's envoy, Ambassador Sidi Haji Abdul Rahman Adja. Upon inquiring "concerning the ground of the pretensions to make war upon nations who had done them no injury", the ambassador replied:

It was written in their Koran, that all nations which had not acknowledged the Prophet were sinners, whom it was the right and duty of the faithful to plunder and enslave; and that every mussulman who was slain in this warfare was sure to go to paradise. He said, also, that the man who was the first to board a vessel had one slave over and above his share, and that when they sprang to the deck of an enemy's ship, every sailor held a dagger in each hand and a third in his mouth; which usually struck such terror into the foe that they cried out for quarter at once.

After returning to Washington, Jefferson argued that paying tribute would encourage more attacks. Although John Adams agreed with Jefferson, he believed that circumstances forced the U.S. to pay tribute until an adequate navy could be built. The U.S. paid Algiers the ransom, and continued to pay up to $1 million per year over the next 15 years for the safe passage of American ships or the return of American hostages. Payments in ransom and tribute to the privateering states amounted to 20% of the U.S. government's annual revenues in 1800!!  Can you believe we ever negotiated with terrorists?

Jefferson continued to argue for cessation of the tribute, with rising support from George Washington and others. With the recommissioning of the American navy in 1794 and the resulting increased firepower on the seas, it became increasingly possible for America to refuse paying tribute, although by now the long-standing habit was hard to overturn.


On Jefferson's inauguration as president in 1801, Yusuf Karamanli, the Pasha (or Bashaw) of Tripoli, demanded $225,000 from the new administration.  In response, "Jefferson sent a small force to the area to protect American ships and citizens against potential aggression.

And thus we entered the first Barbary War. On June 10th 1805, a peace treaty was signed which halted hostilities and returned American prisoners for a price.  But by 1807, Algiers had gone back to taking American ships and seamen hostage. The War of 1812 kept America too busy to respond until 1815 when we sent two naval squadrons to deal with the problem.  The United States Defeated the Algerian pirates once again and on July 3, 1815, aboard the Guerriere in the Bay of Algiers, a treaty was signed that guaranteed no further tributes and granted the United States full shipping rights!!
Fascinating!