First things first, last week's winners are: Ashley Roberts and Kath!!  (Ladies please contact me ASAP. You didn't leave your emails and if I don't hear from you in a week, I'll have to choose someone else! Eeeek!!!)

Congratulations, Ladies!!!  And thanks again for all you who entered!!  I read and thoroughly enjoyed all your comments! But don't dismay! You have yet another chance to win!!

Now that you've had a good look at each character, let's see how much you really know them!

So without further ado, it's the ever popular, "Guess what the character will say next" contest!!

To set the scene this is Adalia's first encounter with Morgan. He and his brother have been playing at swords when she accidentally walks by.

Adalia fumed. She should ignore the pompous scamp and head back to the carriage. But the man stood between her and the bridge.  A rather handsome man if she were forced to admit. Hair the color of wheat and as wavy as the sea under a high wind. Eyes as green as the moss hanging from the trees, glinted mischievously in the sunlight. His taut chest peeked at her beneath his loose shirt flapping in the breeze. Tight black pantaloons led down to bare feet. Her body heated at his lack of attire. Did he have no shame?
He gave her an audacious grin which only infuriated her further. She had been silent too long in front of men like these, and now she had a chance to tell them what she thought without repercussions. For they held no power over her. She must remember that. No one owned her anymore.


Morgan waved at the other impudent devil. “We shall perform for you, Miss and you may judge the victor.”
“I need no performance to make my judgment, sir,” Adalia replied. 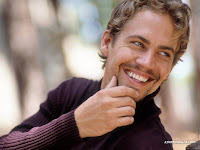 “Indeed? Then, no doubt, you have been admiring our skill from afar?” The light-haired brat waved his arm with flourish. “I implore you, do dispense with formalities and deem me the victor.” He chuckled.
“I will deem you, sir. But as nothing but a swaggering, vainglorious despot.”
A gasp escaped the dark-haired whelp’s lips before a chuckle followed. At first a choppy sort of “I can’t believe she said that, chuckle” but finally ending with a full-fledged belly laugh. The light-haired man (Morgan) gaped at her as if she’d grown a mustache. He planted his sword in the dirt and leaned on the hilt.
“I do believe the lady is acquainted with you.” The dark-haired man stopped laughing long enough to say.
But she wanted no more to do with either of them. “Good day to you, sirs.” Gathering her skirts, she headed toward the narrow bridge.
“I daresay, Miss.”  The light-haired man called after her. “How can you say such a thing? You hardly know me.”
“I know your type.” She shot over her shoulder and took a cautious step onto the bridge, which didn’t appear very sturdy now that she was up close. The wood creaked beneath her shoe.
“And what type is that?” His voice grew closer behind her.

Now it's your turn to choose what Adalia's answer will be!!  Put your answer in your comment, along with your email and you'll be entered to win one of two books.

A. She swung around, eyes blazing. "The type who thinks every woman will swoon at your feet!"
B. "The type who has neither the mind nor heart to even know what type he is."
C. Adalia faced him. “The type who plays idly while men and women are enslaved to do your work.”
D. She felt a blush rising. "The type who forgets how to dress in the presence of a lady."

I know I've made it hard this time.. but think hard about what her values are. Next week, I'll choose two more winners (not based on your answer, by the way)  And I'll show another excerpt and have you guess what Morgan would say.  (Please don't forget your email!!)