Are we doing baptism right?

"Many institutions and elements of institutions which have sometimes been thought to belong to primitive Christianity belong, in fact, to the Middle Ages"  Edwin Hatch 19th century English Theologian 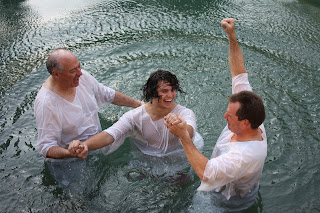 The good news is total immersion water baptism is Biblical and was preformed all the time in the New Testament!  Most Protestant churches today practice this type of Baptism.  The bad news is, they often do not practice it at the correct time. In fact, when you got "saved", chances were you probably weren't baptized until a later date, weeks, months, possibly years from the point of your conversion. If you were led to your baptism moments after your salvation, then you were following in the correct traditions laid down by God in the New Testament.  Personally, however, I've never seen this. In fact, I was baptized years after my conversion.

In the first century, water baptism was the outward confession of a person's faith. In fact, the writers often used the word baptism in place of the word, faith, because to them, baptism was the one action that portrayed one's initial confession of faith in Christ.  Without baptism, the person's salvation was not complete.  See (Acts 2:41, 8:12, 35-37 and Acts 16 as examples)

Today, however, the "sinner's prayer" has replaced the act of Baptism as the outward expression of a person's salvation. Anytime anyone "gets saved" we have them repeat some form of prayer which declares they've repented of their sins and now believe in Jesus as their "personal" savior.  This, however, was never done in the early church.

The separation of baptism from receiving Christ began in the early 2nd century when certain influencial Christians taught that a person could not be baptized without having a period of instruction, prayer, and fasting. This legalistic view of baptism only grew worse with time when young converts had to wait up to 3 years to be baptized! During that time, their lives were put under microscopic scrutiny and they had to prove themselves worthy of being baptized.  The act of baptism became an embellished ritual complete with blessing the water, full disrobing, uttering of a creed, anointing with oil, exorcism, giving the convert milk and honey.. etc    (How sad all of this must have made Jesus)

But it got even worse!  Many believed that if you committed a sin after you were baptized, you could not be forgiven!!   For this reason, many people, including Constantine, were not baptized until they were on their death beds.

So, although total immersion baptism is correct, we seem to be doing it at the wrong time. I'm sure God is pleased either way, but for me, the New Testament way makes a lot more sense!