Are we doing Communion right? 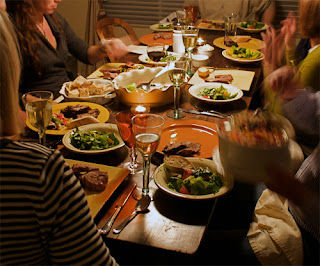 To answer that question, let's first look at how the Christians celebrated the Lord's Supper in the New Testament.  The Lord Jesus, Himself, showed by example that the Lord's supper was to be a meal shared among his followers in which the bread and the wine brought remembrance of Him.  To the early Christians, the Lord's supper was a festive meal, a chance for Christian brothers and sisters to get together and share their lives and their food and remember Christ. The would break the bread in the beginning of the meal and pass it around, then eat, and afterward they would share the cup.   There were no clergymen there to officiate. It was essentially a Christian banquet.

(See Eric Svendsen: The Table of the Lord  and William Barclay: The Lord's Supper)

Paul mentions the Lord's supper in 1 Corinthians 11 and warns the believers to participate in a worthy manner. If you read the entire passage in context, it appears that some people were using the supper as a chance to get drunk while others weren't sharing their food with the poor! Those are the issues he was addressing.

In most modern protestant churches today, the Lord's supper has been reduced to a bite-size cracker and a shot glass of grape juice served by ushers in a very solemn atmosphere. The pastor usually encourages everyone to examine themselves and repent of any wrongdoings before partaking of Communion.

So, how did we get so far from the way the early church did the Lord's supper?  Sometime around the 2nd century the taking of the bread and the cup became separated from the meal. Some say it was because Christians didn't want unbelievers to profane the Lord's supper by participating in the meal, but it also could have been the growing influence of pagan religious ritual.  The term Eucharist came to replace the terms, "the bread and the cup" and the entire process began to be looked at as a holy offering.  The "elements" were then placed on the altar of the church, making them seem like sacrifices and creating a sort of mystique around them as being supernatural in nature. People now looked at them in awe, as things only priests could handle.

Under further influence by pagan mystery religions, the bread and the cup were now considered holy and the taking of them a sacred ritual that could only be performed by priests.  It became shrouded in a religious mist, viewed in awe and taken with glumness. Finally in the forth century, the doctrine of transubstantiation came into being. This is the view that the bread and wine change into the Lord's actual body and blood.  Now, the common man became terrified to take the sacred elements, believing they were actually partaking of Jesus's body, thus further separating the church from the clergy.

Of course the Protestants got away from the view of transubstantiation during the Reformation but we kept most of the other aspects of the now far-removed-from-the-Bible  Lord's supper!

So what are your thoughts? I have to be honest. This information blew me away.