Are we Worshiping right?

So, now we've discussed the church building, ceremonies, the sermon and the pastor. So what about the music part of the worship? Surely that's Biblical, isn't it?

Choirs were started during Constantine's reign and were borrowed from Roman Custom which used music to celebrate imperial ceremonies.  Soon because the clergy believed that they could curb the spread of heresy by allowing only the choir to sing, the congregation was forbidden to join in, and in AD 367, congregational singing was altogether banned. Only trained choirs could sing in church
Papal choirs began in the 5th century and Gregory the Great reorganized the Schola Cantorum (school of singing) in Rome which trained Christian choirs throughout the Roman empire.  These trained performers reflected the Greek culture mindset which was built around the audience-performer dynamic.

But then came the Reformation. John Huss (1372-1415) was among the first to bring singing back to the people in church, although the choir remained in order to direct the congregation. Not until the middle ages do we see musical instruments accompanying the singing. Many church fathers believed musical instruments were associated with immorality and idolatry.   However the organ was first used in churches in the 6th century.  As choirs grew they came to be seated up on chancel (clergy platform), and its members wore fancy ecclesiastical robes.

Today in modern Protestant churches, we have the worship team, which is normally a band with singers, much like one would see at a concert. Their job is to stir up the people into worship with lively hand-clapping, hand-raising tunes, followed by more deep and calm, worshipful music. This usually lasts for 20 minutes or so when the band leaves the stage, the offering plate is passed, announcements read, and the sermon is given. In some churches the band returns at the end for the grand finale.  The origin of the worship team  came from the founding of Calvary Chapel in 1965 by Chuck Smith, who started a ministry for hippies and surfers and welcomed them with their instruments into the service.

I don't know about you, but I really enjoy the worship part of church!. The music moves me and gets me thinking about God and His goodness. It's a fun time. So what's the problem? The problem is that special stage musicians leading worship is not found anywhere in the New Testament. Instead we see phrases from Paul like "Every one of you hath a psalm" 1 Corinthians 14:26 and "Speak to one another with psalms, hymns and spiritual songs" Ephesians 5:19  In other words, everyone has the privilege of singing their praises to God, not just a select few who are following a pre-determined schedule and list of songs. Nor should we allow only those few to tell us what and when to sing! 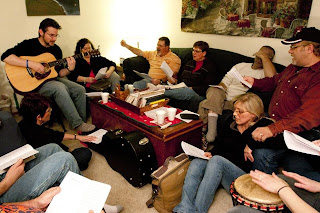 I have seen this played out personally in a small group I used to belong to. We were all sharing about what the Lord had done in our lives during the week and based on what most of us said, this woman broke out into a worship song, giving praise to God. Soon, all of us were singing and worshiping. This is the kind of Spirit-led, Christ-centered worship God is looking for.