The Founding Father who disappeared!

Unless you've read and memorized all the names of the men who signed the Declaration of Independence, you probably won't recognize the name, Thomas Lynch. Jr.  In fact, he was not supposed to be at that historic Continental Congress in Philadelphia at all! It was his father, Thomas Lynch Sr. who had been bent to represent South Carolina.

The Lynch family had immigrated to South Carolina from England in 1677. Thomas's great grandfather became a prosperous planter and a member of the colony's legislature. Successive generations moved to the Santee River where they expanded the family lands and built a  plantation home.  Thoma's father and grandfather were also part of the legislature, so naturally Thomas was sent back to England for a formal education in law when he was of age. When he returned to South Carolina, he married, inherited the Lynch plantation and settled into the live of a rice planter. 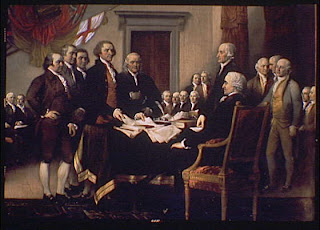 However trouble began to brew in the colonies as people became unhappy with the rule of England. Although the Lynch family was initially against independence from England, Thomas's father had attended the First Continental Congress in which a declaration of rights had been adopted and sent to England. The British response was to send troops to Boston.  Realizing that declaring American Independence seemed to be the only way, Thomas' father attended the 2nd Continental Congress in Philadelphia

However in March of 1776, young Thomas Lynch received word that his father had suffered a cerebral hemorrhage. The South Carolina congress sent Thomas to tend to his father and take his place in the delegation. Therefore at the age of 26, Thomas Lynch Jr. joined Benjamin Franklin, Sam Adams, Thomas Jefferson and other delegates in creating the Declaration of Independence and signing his name to it. A blank spot was reserved for his father to sign it as well, but the man soon died from another hemorrhage. 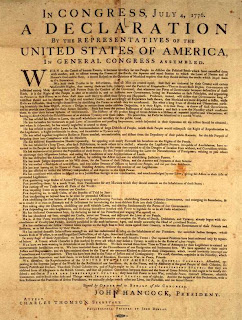 Back home in South Carolina, Thomas Lynch grieved the loss of his father and succumbed to a fever that robbed him of his health and his strength. War began and Thomas knew not whether his signature on the Declaration would brand him a traitor or a patriot. He could not foresee the glorious end to the Revolution and the establishment of a new nation, nor could he know that generations of Americans would revere the Declaration of Independence that bore his signature.

In December of 1779, Thomas Lynch and his wife departed South Carolina for France on the advice of his doctor to rest and recover his health.  Lost at sea, they were never seen again. He was only 30.
Posted by MaryLu Tyndall at 12:30 AM