Is the role of Pastor Biblical? Part 2

Last week we saw how the concept of church clergy and laity came into being in the early 3rd century, the idea that there was a certain class of people set apart and called to be church leaders, specially educated, ordained, and in charge of all church functions, including the sermon, baptisms, and communion. Basically, I described how the Catholic church got started. This week I want to focus on the Reformation, which was the pull away from Catholicism in the 16th century.

Many of the ideas of the Reformers were great. They denied that a priest could convert wine into blood. They encouraged the clergy to marry, they revised the service to allow the congregation to participate, and abolished the office of the bishop and priest. Their cry was the restoration of the priesthood of all believers! Sounds great! But the truth is that restoration was only partial. It only applied to the individual, saying that each believer had access to God and the Scriptures. But it did not apply to the corporate body of Christ as described in the New Testament where all believers are equal and each has a gift and calling for the benefit of other believers. 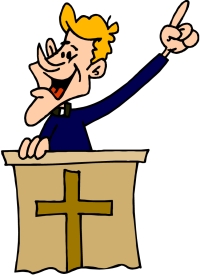 The Reformers still believed in the split between clergy and laity, elevating the role of pastor or minister as one specially trained, called, ordained to be a paid mediator between God and His people in order to communicate God's will. They believed the pastor possessed Divine power and authority and when he spoke, He spoke in the name of God.  Here are some of Martin Luther's own words.
"God speaks through the preacher",  "A Christian preacher is a minister of God who is set apart, yea, he is an angel of God, a very bishop sent by God, a savior of many people, a king and prince in the Kingdom of Christ"  and "It is a wonderful thing that the mouth of every pastor is the mouth of Christ"

Calvin believed that the pastor was a "cure of souls" or a curate and his task was to bring healing, cure, and compassion to God's hurting people. Today many pastors try to fulfill such a role in church by counseling, praying with people, visiting the sick, and other duties. The burden of the entire church falls on one man, while in the first century church, it fell on the shoulders of the entire church and a group of mature-in-Christ elders.

Let me mention here that I have nothing against pastors. I love my pastor and I've had some great ones over the years. Most have been Godly men who truly care about their congregation. But I want to examine here some of the problems and negative results with having one man or even a small group of men in charge of an entire church.


Not only does the role of the pastor hurt Christians, it also hurts the pastor himself. He is trying to do everything, every task that should be spread among the people. Depression, burnout, stress, and emotional breakdown occur at abnormally high rates.  I personally have witnessed the fall of two pastors in my own city!  Because the pastor is set up on a pedestal, he often battles pride. Some face horrific temptations as weak women tend to throw themselves at pastors.

In truth, the one man at the head of a church is not found anywhere in the New Testament. Rather we see small gatherings of believers meeting together, participating, and each one using his or her gift to help the others.