I came across this little interesting fact when I was doing research for The Raven Saint. It's about a group  of young women who were rounded up by King Louis XIV and sent to the Americas to become wives.  (Would make an interesting book!) 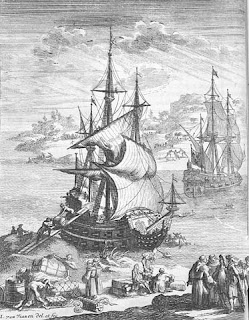 In order for New France to prosper, people were needed. Thus the King decided to send women to the french colonies. Between 1663 and 1673, the King of France sent at his expense, several thousand young women to the New World, and in particular, New France, which was in Canada. Most of these women came from the Paris area or the diocese of Rouen. They were poor, abandoned, with no future in France, often orphans. The King bestowed upon them a dowry of between 50 and 300 livres and named them filles du roi.


"The 100 girls sent over by the king this year have only just arrived," wrote Mother Marie de l'Incarnation, on October 29, 1665, " and already they are almost all accommodated. He will send another 200 next year, and even more in the years following, in proportion to the need. He will also send men to marry withstanding those who are in the army. Truly, it is an amazing thing to see how the country is becoming populated and multiplying." 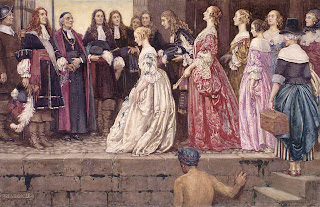 The recruiting was often carried out by guardians, such as Anne Bourdon, who witnessed thirty marriages.

Almost half of the filles du roy were from the Paris area, 16% from Normandy and 13% from western France. Many were orphans with little or no education who came from the lower classes, but some were from elite families who had lost their fortunes. Those women of higher birth were usually matched with officers or gentlemen living in the colony, sometimes in the hopes that they would marry nobles living in Canada and thereby encourage the nobles to stay in the colony rather than return to France.

There were rumours that some of the girls sent to the colony had been prostitutes in France, but Pierre Boucher defended the honour of his new compatriots.
"It is not true that this sort of women come here and those who say this are greatly mistaken," he wrote, "if, by chance, it happens that there are a few among those who come who are discovered, or that during the crossing they behaved badly, they are sent back to France." It was hard to live a scandalous life in such a small colony. What these young women had in common was their poverty.

" The girls sent last year are married and almost all of them are with child or have had children already, a sign of the fertility of this country, " wrote Jean Talon to the king, in 1670. Jean Talon actively encouraged their fertility, decreeing in an edict on April 5 1669 that all inhabitants having 10 living children, born of a lawful marriage, "not priests, monks, or nuns, will be paid a pension of 300 livres a year; and for those having 12 (children), 400 livres more; furthermore, all boys who marry at the age of 20 years or less and to girls of 16 years and less, will be paid 20 pounds each on their wedding day.

When the women arrived in New France, the amount of time it took them to find husbands varied greatly. For some, it was as short as a few months, while others took two or three years before finding an appropriate husband. Some even cancelled their marriage contracts; no doubt finding their fiances distasteful.

Interesting stuff, huh? I love the part about being paid to have 12 children!! Egad!
Posted by MaryLu Tyndall at 12:30 AM