Of course we all remember learning about Christopher Columbus in school, the expert navigator and sailor who founded the New World. We envision him as a kind of dare-devil, hard-headed navigator, a man ahead of his times.  But did you know that ole Chris was also deeply religious and very interested in apocalyptic prophesies?  In fact, the entire reason for his journey across the sea was not just to find a pathway to India and China, nor was it simply to acquire gold for Spain. No Columbus had a Biblical reason for his journey. He believed it was his destiny to find the new land and acquire gold to wage a holy war against the Muslims inhabiting Jerusalem and to win back the Holy City before Christ's return, thus ushering in the millennial age.   He believe his discovery of the New World was necessary to fulfill an ancient prophecy.

He wrote of America in 1500 AD:  "God made me the messenger of the new heaven and the new earth of which he spoke in the Apocalypse of St John after having spoken of it through the mouth of Isaiah; and he showed me the spot where to find it."

Christopher Columbus was an avid student of Biblical prophecy. He studied them very carefully and put together his own book entitled Book of Prophecies, which he used to sell his  voyage to Ferdinand and Isabella of Spain.  This book is a compilation of an entire range of prophecies from both the Old and New Testaments as well as more modern prophesies of the day.  He particularly liked one of the prophecies from the early 14th century which said that there would be a final world emperor, a Spanish ruler who would conquer Jerusalem.

The gold Columbus would find in the West Indies was to be used to mount the military expeditions that would reconquer Jerusalem and issue in a universal messianic rule in which Christianity would triumph under the leadership of a Spanish monarch. 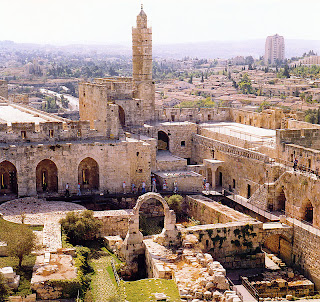 Columbus's Book of Prophesies was written between 1501 and 1505 and aspires to the belief that in order for the world to end and Jesus to return, these events must take place:

As we all know Columbus died without seeing any of his prophecies come to fruition.
Posted by MaryLu Tyndall at 12:30 AM