Don't forget to arm yourselves!!

And from that time forth, half of my servants worked at the task, and the other half held the spears, shields, bows, and coats of mail; and the leaders stood behind all the house of Judah.
Those who built the wall and those who bore burdens loaded themselves so that everyone worked with one hand and held a weapon with the other hand, Nehemiah 4:16-17 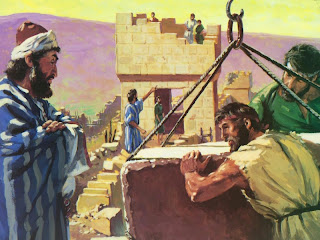 Nehemiah had been tasked with rebuilding Jerusalem from the rubble it had been reduced to after Babylon's conquest. After 70 years of captivity, the king, Artaxerxes, commissioned Nehemiah to return to his home land, along with some of the Israelites, to rebuild the old capital.  But of course, as there is today, there were some people who didn't want the Jews back in their land. Poor Nehemiah had trouble from multiple fronts: The Samaritans, Ammonites, Philistines, and local Arabs. These enemies did everything they could to stop Nehemiah.  Under the threat of death, Nehemiah and his workers continued to rebuild, but they armed themselves heavily while they did so. As you can see from the above passage.. they worked with one hand, while holding a weapon in the other!

This struck me as I was reading it and I began to wonder how seriously most Christians take the battle we are all involved in. I say that because I rarely come across a believer who even mentions any spiritual warfare.  All the problems, diseases, and struggles they are enduring are chalked up to bad luck or the will of God without ever considering that we have a fierce enemy who doesn't want us to rebuild our lives on the foundation that is Jesus. An  enemy who would do everything he could to kill us, destroy our lives and make us ineffective for Christ.  Yet rarely do I hear any warfare in our prayers... but rather repeated petitions for God's help.  Will God help us? Of course.  But what some of us forget all too easily is that He has already given us to tools to battle the enemy victoriously here on earth.  So I wonder if God doesn't just shake his head and wonder why we aren't using the sword He has already put in our hand!


Jesus won the victory over Satan and his demons on the cross. Once and for all. And someday (soon, I'm thinking) Jesus will come back to claim the earth as His own. In the meantime, this is Satan's territory and he has a vast kingdom and a huge army of fallen angels and demons. They are well organized and armed for battle. And their target is mankind.

So what are we do to?What are our weapons?


For the weapons of our warfare are not physical [weapons of flesh and blood], but they are mighty before God for the overthrow and destruction of strongholds 2 Corinthians 10:4 Amplified 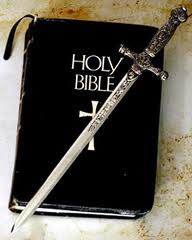 Recently my husband and I were in Jamaica on vacation for our 20th anniversary. Jamaica is a lovely island with beautiful beaches and scenery and we had a great time, but it is an island that is dark spiritually.  Both my husband and I could feel it as soon as we arrived.  We spent 6 fabulous days having the time of our lives but on our last night there, we both felt something was wrong.  Not really thinking anything of it, we went to sleep. Sometime in the middle of the night I was woken by flashing lights.  I peeled my eyes open to see that several lights on the wall were flashing on and off. I thought I was dreaming, so I tried to go back to sleep. But the lights persisted. I got up from bed. No one else was in the room except my husband and he was sleeping. The lights kept flashing. They had never done that before the entire time we were there and I couldn't understand it. I wasn't really afraid because I was half asleep so I went over and tried to fiddle with the wall switch. It seemed to be already off, but the lights went off and I went back to bed. Not seconds later my husband started groaning next to me in agony.  I knew immediately what was happening because I'd heard him groan like that before (another story for another time. So I sat up in bed and shouted. "Get out in the name of Jesus and don't come back!"   My husband woke up at that moment and thanked me. And we both went back to sleep.  In the morning, I told him about the lights and he told me that he was having a horrible nightmare with ravens poking out people's eyes, etc.. scary stuff. We both concluded that we must of had a run in with some demons.

I hesitate to share this because I'm sure some of you will laugh. Others will scoff and some will think I've lost my mind. I also don't want you to think I'm patting myself on the back. I was dazed and just did the first thing that came to mind. (I'm sure prompted by the Holy Spirit)  But I can tell you  with all sincerity that this happened. And it was the name of Jesus that stopped the entire thing. Coincidence?  You tell me.

My point is.....go about your work for the Lord, but don't forget to have a weapon in your hand should you need one!