I came across the story in my search for heroines from our past. So often only heroic men get mentioned but there were many women throughout history who performed heroic feats.  This one in particular must be considered within the context of the time. Women simply didn't do such things. It was unheard of for a genteel woman to risk her life in such a courageous way. Especially a lady so young. Here's Grace's story. 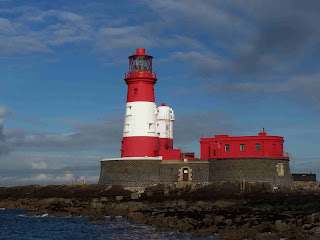 The Farne Islands lie off the coast of Northumberland, England. They are not really islands but more a collection of rocky outcrops. When the tide comes in, many of them are wholly submerged making them extremely dangerous for passing ships. In 1826 a new lighthouse was built on the outermost island, Longstone.  The lighthouse was a round tower 85 feet high containing 7 circular rooms. A man named William Darling became the keeper and moved to the lighthouse with his wife, Thomasina and 9 children.  By 1838, however, most of the children had grown up and only one girl, Grace, and her younger brother were living with their parents in the tower. 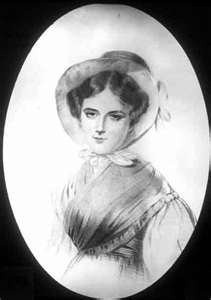 Young Grace was 22 years old and was described as having  "a comely countenance. . .rather fair for an islander. . . and with an expression of benevolence and softness mot truly feminine in every point of view."

The accident that would bring this young lady notoriety happened on September 5th 1838. The Forfarshire, a steam ship, was bound for Dundee with a mixed cargo of hardware, fine cloth, soap, boilerplate and spinning gear. Captain Humble had his wife on board, along with 55 passengers and crew. As the ship headed north up the coast, the winds increased and the seas roughened.  Regardless, the Captain decided to continue onward rather than seek shelter. At approximately 6:00 pm they passed the Farne Islands, steaming between the inner sound and the mainland. But as night fell, the conditions worsened and a damaged boiler forced Captain Humble to shut down the engines. Setting the fore-and-aft sails, he decided to turn back and run before the gale, passing by the Farne islands again.  But the storm overcame them and the 400 ton vessel drove hard into the end of Harker's Rock. Within 15 minutes, the deck opened up and the ship split in two. The stern section swept away and sank, drowning Captain Humbel and his wife and 41 passengers and crew. The forward section was stranded on the rocks with twelve people surviviing, including one woman two children, a clergyman, a fireman and the ship's carpenter 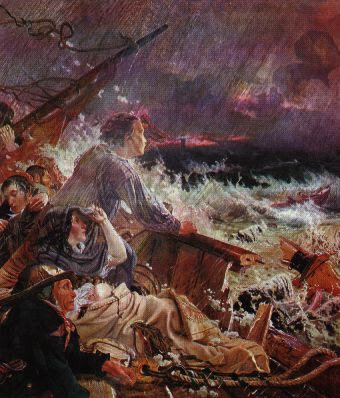 As dawn broke, they mananged to seek shelter on the rock, but the freezing wind and sea spray threatened to kill them off with hypothermia.  When the ship struck at 4:15 AM, Grace was on watch in the high tower. At 4:45, she could barely make out the ship in the pre-dawn glow. She immediately woke her father and for the next few hours, he used his telescope to see if there were any survivors. Finally around 7:00 AM, William Darling spotted men on the rock.  He had to get to them straight away but his 20 year old son was on shore, and William could not row a boat by himself. 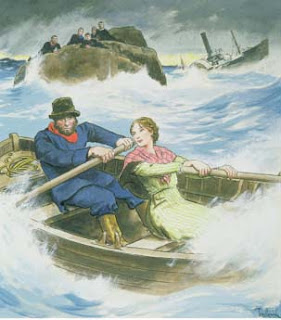 According to the legend, Grace had to persuade her father to launch the boat and insisted she join him. The gale was still raging and the passage to the survivors would have been extremely turbulent and dangerous. With Grace heaving on one oar and William on the other, they rowed toward the wreck with Mrs Darling watching from the lighthouse. They finally reached the survivors, but the cold had killed the clergyman and the two children, who died in their mother's arms. While William crawled on the rock to assist the survivors, Grace was left to manage the heaving boat on her own and to hold it off the rocks. The woman and four of the men clambered aboard the boat and they set off on the mile long trek back to the lighthouse, an equally treacherous journey, especially now with the extra weight. Finally they made it ashore and headed back out to get remaining survivors

It was several days before the story became public. Somehow it caught the ear of the Duke of Northmberland and exploded from there into a series of newspaper articles, interviews, even a play. Grace became a national heroine. Artists painted her picture, poems were written about her exploits, Staffordshire figures were made in her likeness and hundreds of engravings were produced to commemorate the rescue.  Yet Grace always took this in stride, refusing to accep the praise and even quietly blushing at the attention.

A true heroine.
Posted by MaryLu Tyndall at 12:30 AM