First things first, the winner of Central Park Rendezvous is LifeDance!!  (Picked by Random.org)  Thank you all so much for your comments and for entering to win this great novella!

Even if you're not a writer, this is a pretty interesting question. It's one of the first rules you hear about when you enter the writing world. Before that, I'd never heard of it. But if you pick up any book today on writing, I guarantee it will have at least a few paragraphs if not a few chapters on showing vs. telling.  For those who don't write, take up this challenge, read through this post and the next book you pick up, see if you can spot where the author "showed" instead of "told"  or perhaps spots where the author "told" instead of "showed". It's actually pretty interesting.

So which is preferable?  Showing. The reader doesn't want to be told what is happening to the character in the story, they want to be shown. They want to feel, hear, touch, see, smell, and taste what the character is experiencing.  When an author can pull that off, the reader is transported deep within the story and becomes a part of the storyworld, moving through the scenes and experiencing everything the character does. If you've ever closed a book and felt like you were losing your best friends, or longed to dive back into the world the book created, then the author did a good job of showing not telling. 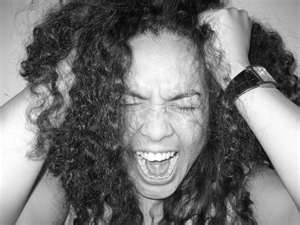 So why did I entitle this post Writer's Nightmare?  Because showing is HARD work. Telling is easy. Showing will put sweat on a writer's brow and make them grab handfulls of their hair while groaning nonsensical curses at no one in particular.

Let me illustrate with an example from the book I'm writing now: Illusive Hope

Telling: She was so beautiful, his desire for her was stirred
Showing:  Her flaxen hair, adorned with sparkling beads, was swept back in a bun from which tumbled ringlets about her neck. Her shimmering blue gown only enhanced the color of her eyes. Ruffles bubbled like foam from her bell-shaped sleeves, while the lace embellishing her low neckline drew his unbridled gaze. He gulped and prayed for a breeze to drift down the hall and cool the heat swirling deep in his belly.

Which one gave you a better idea of what the hero is actually seeing and how it affects him?  Which one do you think would be harder to write?

Telling:  She cried while running through town and listening to the sounds of wagons, vendors and birds.
Showing: Tears mottled everything in blurry colorful patches as she twined her way through the swarm of beasts and humanity. The sounds of creaking wagons, shouts of vendors, and squawk of birds blended together in a perverted hum

Telling: He was hot
Showing: Sweat glued his shirt to his chest and formed puddles on his forehead 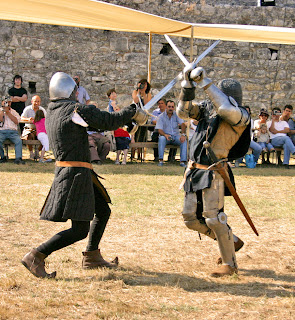 Getting the point? Telling is just telling your reader what the character is experiencing. Showing is putting them in his skin so they can experience it. It definitely takes more work but it's worth it in the end. So how does one go about doing this? I don't know about other authors, but I stop, close my eyes and imagine what my character is feeling, seeing, smelling, touching and tasting at that particular moment.  Not all the senses will always be used but normally at least two are engaged in every event. Showing is particularly important during emotional or stressful scenes where the character is distraught, frightened, angry, worried...any of the really impacting emotions. Or when the character is running for their lives or fighting a deadly battle or has just received the shock of their lives.

You don't want to just say  "She was shocked." You want to say something like "Numbness spun her thoughts into a stupor and crept down her spine, smothering each pulse of blood through her veins."

Can you feel her shock in the second one? See how much more involved you are in what's happening to her than you are if the author had just said. "She was shocked"?

Believe me, some days I'm beating my head against the wall trying to come up with the best way to show something and not tell it. The lazy side of me wants to just tell you what the character is experiencing... and sometimes I might let a few of those slip by. But it's worth doing the hard work. It's what separates the writers from the authors.

Have a great weekend, everyone!
Posted by MaryLu Tyndall at 12:30 AM