Okay, confession here. I really never read contemporary books. I'm so in love with historicals that I rarely pick up a book that isn't set in the past. I make an exception for Ronie Kendig's books.  First of all, I love the military. I have two daughters in the military and a brother who works in law enforcement. I support our troops whenever I can. Ronie's love and respect for our military shines through her stories. But before you click away, saying 'Ah, I don't like military stories'  let me tell you that Ronie's books are so much more than that. They are suspense, adventure, romance, and spiritual. Yes, all those things packed tight in a story that will blow your socks off!  You'll learn a lot, you'll be moved deeply, you'll gain greater respect for our troops, you'll grip the edge of your seat, and you'll fall in love. I guarantee it. One thing you'll not do is close the book disappointed.

I adored Ronie's Discarded Heroes Series!  And this first book in her new A Breed Apart series is fantabulous. If you love dogs, you're going to go crazy over this new series.

The first book is called Trinity.  Here's what it's about:
A year ago in Afghanistan, Green Beret Heath Daniel's career was destroyed. Along with his faith. Now he and his military war dog, Trinity, train other dogs and their handlers. Though his passion is to be back in action, the medical discharge has forced Heath-and Trinity-to the sidelines. Military intelligence officer Darci Kintz is captured while secretly tracking the Taliban. Only one dog can handle the extreme conditions to save her. Trinity. Only one man can handle Trinity. Time is running out on the greatest-and most dangerous-mission of their lives. 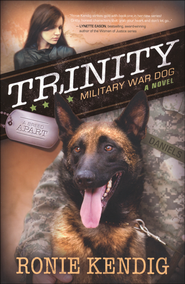 Want high-impact action, military suspense, romance, adventure, great characters, and a theme that gets you thinking. . .than look no further than Ronie Kendig. This author has a knack for grabbing you and shoving you right in the middle of some pretty intense, heart-thumping action. Every night when I curled up to read, I felt like I was roaming around the blistery caves in Afghanistan with a loyal German Shepherd by my side, being targeted by rogue Chinese madmen. Now, how often do you get to feel like that? (Especially from the safety of your own couch.. which is where I prefer to be!) Ms. Kendig's characters are always wounded in some way. . .and I don't mean just on the outside, but that's what makes them real. Aren't we all wounded from life? Don't we all need second chances and new hope? That's exactly what the hero and heroine in this story need, from each other and from God. The fun part is watching them grow and change and reach out for that lifeline. Add to that tons of hunky military guys, the rescue of the hero's lady love, and my favorite character, Trinity, the dog who stole my heart, and this was one fun read!! I guarantee once you start this book, you won't be able to stop turning the pages. 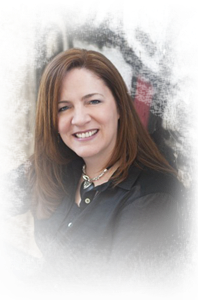 An Army brat, Ronie Kendig grew up in the classic military family, with her father often TDY and her mother holding down the proverbial fort. Their family moved often, which left Ronie attending six schools by the time she’d entered fourth grade. Her only respite and “friends” during this time were the characters she created.
It was no surprise when she married a military veteran—her real-life hero—in June 1990.  Married more than twenty years, Ronie and her husband, Brian, homeschool their four children, the first of whom graduated in 2011. Despite the craziness of life, Ronie finds balance and peace with her faith, family and their three dogs in Dallas, TX.
Ronie has a deep love and passion for people, especially hurting people, which is why she pursued and obtained a B.S. in Psychology from Liberty University. Ronie is an active member of the American Christian Fiction Writers (ACFW) and has volunteered extensively, serving in a variety of capacities from coordinator of a national contest to appointment assistant at the national annual conference.
To learn more about Ronie, Visit her website! It's really cool!!   Ronie's website

Leave a comment with your email address to win a free copy of Trinity!!!  Drawing will be held on October 11! Winner announced on the 12th!

Have a great weekend, everyone!