The Jewish Feasts and their Connection to the Rapture

I've been doing a bit of research on Judaism and the meaning and timing of each of their Seven feasts and I ran across something really cool!!  A link to the timing of the Rapture. Let me state I'm not some fanatic who's going to tell you when the Rapture will occur, but I do have compelling evidence that I can pinpoint the season. Now, be patient and bear with me. To set the stage, let's start with the Jewish Feasts that occur in the Spring.  Each Feast has a deep spiritual meaning and each feast was fulfilled in the natural by an important even in God's time table.

Passover and the Feast of Unleavened Bread are celebrated together. 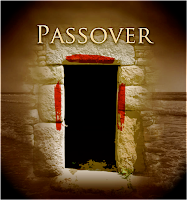 Passover - This is the yearly celebration of God's deliverance of the people of Israel from slavery in Egypt. Most of you have heard the story found in the book of Exodus in the Bible where God sent plagues on the Egyptians. The last one He sent was that all their first born would die. In order to be saved from the angel of death, the Jews killed a lamb, spread the blood on the posts and lentil of their doors and remained inside. This feast occurs on the 14th in the Jewish month of Nisan.  (Leviticus 23:10-11)

Fulfillment:  When in 33AD Jesus died on the cross of Calvary, his shed blood saves all those who believe in and follow Him.  We know from Scripture that Jesus was crucified on Passover.  He ate the Passover meal (the last supper) with His disciples, went to the Garden of Gethsemane where he was arrested, tried, and executed the next day.  Passover for the Jews (as with any of their days) starts at night and goes to the following night.

Feast of unleavened Bread.  The feast of Unleavened bread began on the 15th of Nisan, the day following Passover, and it continued for seven days until the 21st of Nisan. . God commanded the Israelites to avoid eating any leavened foods (food that contained any fermenting product such as yeast or baking powder) during this festival, reflecting the fact that the Israelites had no time to wait for their bread to rise before their hasty departure from Egypt.  Leaven in the Bible is a symbol for sin as seen in (Luke 12, Matthew 16, Mark 8..) Therefore the feast symbolized removing evil and sin from your life

Fulfillment:  Only possible in the true spiritual sense after Jesus paid our price on the cross 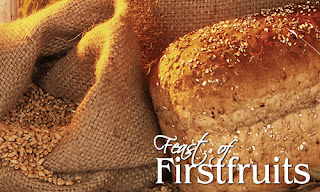 Feast of First Fruits - Celebrated the day following the Sabbath that occurs during Passover (the 17th of Nisan) this feast celebrates the first crops of Spring, the new life resurrecting after winter, which was normally the first sheaves of Barley. These sheaves were waved before the Lord as an offering of thanks. (Lev 23:10-14)

Fulfillment: We know Jesus died on Passover day and we also know from Scripture that the next day was a Sabbath (Saturday), which means that the day after that was a Sunday. Remember Jews count their days from evening to evening, thus making it 3 days since they put Jesus in the tomb, thus placing his resurrection exactly on the Feast of First Fruits

"But now is Christ risen from the dead and become the first fruits of them that slept."..."For as in Adam all die, even so in Christ shall all be made alive. But every man in his own order, Christ the first fruits, afterward they that are Christ's at his coming." [1 Corinthians 15:20,23].

Shavuot the Festival of Weeks or Pentecost -was a celebration of the wheat harvest which  came 50 days after the first fruits in which the Jews were supposed to bring 2 loaves of bread to the temple as a wave offering. Some scholars believe this is the day when Moses received the Ten Commandments from God on Mount Sinai. God Himself came down upon the mountain in fire and smoke to establish a covenant with His people. 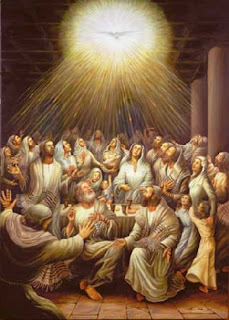 Fulfillment: 50 days after Jesus's resurrection, the Holy Spirit fell on the disciples waiting in the upper room  in a mighty rushing wind and tongues of fire to make another covenant with God's people. Notice the correlation with God's Word on Mt. Sinai and the Word of God coming once again to earth through tongues uttered by the Holy Spirit. 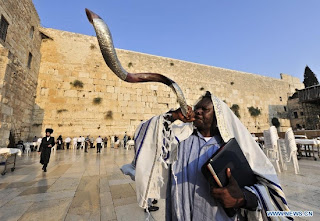 Rosh HaShanah or Feast of Trumpets - Jewish New Year observed on the first day of Tishri. This holiday is also referred to by the Jews as The Awakening Blast or the blast that Awakens the Righteous dead.  This feast kicks off Holy Week for the Jews and is celebrated on the first day of the month as a Holy Sabbath. According to Hebraic Heritage Newsgroup. Rosh HaShanah is referred to in the Torah  as YOM TERUAH, the Day of the Sounding of the shofar (or the day of the awakening blast) Teruah means "an awakening blast". A theme associated with Rosh HaShanah is the theme "to awake". Teruah is also translated as "shout". According to Jewish tradition, the trumpet blown on Rosh HaShanah was a special trumpet which traditionally had been the right horn of the ram Abraham used to sacrifice in place of his son Issac. Abraham blew the trumpet in celebration of Issac's virtual resurrection. This trumpet that is blown is called "The Last Trump". Any Jewish scholar would know this term and the time it was blown. I know I'm being brief here, but please get a book on Jewish feasts and their meanings and look this up.
Paul is giving us a clue as to the timing of the rapture


Yom Kippur - Day of Attonement. It is a Holy Fast.  A day set aside for fasting, depriving oneself of pleasures, and repenting from the sins of the previous year

The ten days starting with Rosh Hashanah and ending with Yom Kippur are commonly known as the Days of Awe (Yamim Noraim) or the Days of Repentance. This is a time for serious introspection, a time to consider the sins of the previous year and repent before Yom Kippur.  One of the ongoing themes of the Days of Awe is the concept that God has "books" that he writes our names in, writing down who will live and who will die, who will have a good life and who will have a bad life, for the next year. These books are written in on Rosh Hashanah, but our actions during the Days of Awe can alter God's decree. The actions that change the decree are  repentance, prayer, good deeds (usually, charity). These "books" are sealed on Yom Kippur. Sure sounds like Yom Kippur is a day of final judgement day to me!. 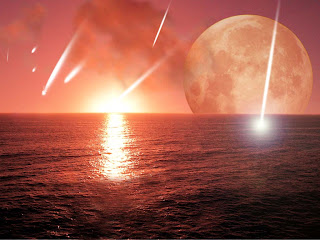 I don't have time to get into this here, but suffice it to say it would seem to me that the Days of Awe are the Tribulation period that occurs between the rapture and the return of Jesus when He sits in judgement over the earth.  The Day of Atonement or Yom Kippur is that solemn day when Jesus returns to judge the world. The ten days of Awe in between Rosh HaShanah and the Day of Attonement actually translate into 7 days if you take into consideration the Jewish method of counting their days from sundown to sundown. 7 days? could that be the 7 years of the Tribulation?

Feast of Tabernacles - A celebration of God living with man. It falls on the 15th day of the month of Tishri and is a time when all of God's people travel to Jerusalem.  In Zechariach 14, it is prophesied that during the Millenial Reign of Jesus on Earth, all nations will celebrate this feast by coming to Jerusalem.  Therefore, this feast will be celebrated at least 1000 times on it's exact day.

So, here's my point, if the first 4 feasts were precisely fufilled on their exact date, and if Rosh HaShanah points to the Rapture of the Church, will the rapture occur on the exact day of Rosh HaShanah?  Of course we don't know the year.  But I think, based on this evidence, it's highly likely the Rapture will occur on that Jewish holiday. (Which usually occurs sometime in our month of Sept)

But you may say we aren't supposed to know the date!  Jesus said he's coming like a thief in the night.  But hear Paul's words

Now, brothers and sisters, about times and dates we do not need to write to you,  for you know very well that the day of the Lord will come like a thief in the night. While people are saying, “Peace and safety,” destruction will come on them suddenly, as labor pains on a pregnant woman, and they will not escape.
But you, brothers and sisters, are not in darkness so that this day should surprise you like a thief. You are all children of the light and children of the day. We do not belong to the night or to the darkness  1 Thess 5:1-4

So what do you think? It doesn't really matter when the Rapture occurs. It only matters that you're a part of it!  But I still think it's cool how close the Jewish Feasts line up major spiritual events leaving us with the possibility that it will occur on Rosh HaShanah one of these years.