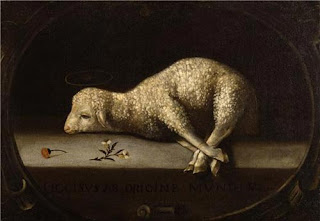 Last week I showed you a few of the many prophecies that predicted the first coming of Jesus. The first time Jesus came to earth, He came as a baby, born of a human mother, fully man and fully God. He had to come this way so He could bear all our sins, all our shortcomings and weaknesses and sacrifice Himself in our stead. He came as a sacrificial lamb

The second time He comes, it will be as a Lion!  There are more prophecies about Jesus's Second Coming in the Bible then there are of His first. I believe this is because His first visit paved the way for his second visit because His second visit is the culmination of God's perfect plan for mankind.  It is the time when all things will become new, when all of our questions will be answered, when history is explained, when wrongs are set right, when justice and righteousness prevails and the enemy of our souls is locked within the earth for a thousand years. Jesus's second coming will be the single GREATEST event in the history of mankind. And the cool thing is, we'll all be there to witness it!

Here's a few prophecies from the Old Testament

"Let the heavens be glad, and let the earth rejoice: and let men say among the nations, the Lord reigneth...Then shall the trees of the wood sing out at the presence of the Lord, because He cometh to judge the earth." (1 Chron. 16:31,33)

"I know that my Redeemer liveth, and that He shall stand at the last day upon the earth; and after I shall awake, though this body be destroyed, yet out of my body, shall I see God." (Job 19:25)

“And he shall judge among the nations, and shall rebuke many people: and they shall beat their swords into plowshares, and their spears into pruninghooks: nation shall not lift up sword against nation, neither shall they learn war any more.” (Isaiah 2:4)

“At that time they shall call Jerusalem the throne of the LORD; and all the nations shall be gathered unto it, to the name of the LORD, to Jerusalem: neither shall they walk any more after the imagination of their evil heart.”
(Jer 3:17 )

New Testament
"At that time the sign of the Son of Man will appear in the sky, and all the nations of the earth will mourn.  they will see the Son of Man coming on the clouds of the sky, with power and great glory! “ Matthew 24:30
reat glory.

For the Son of Man will come in the glory of His Father with His angels, and then He will reward each according to his works. Matt 16:27

For whoever is ashamed of Me and My words, of him the Son of Man will be ashamed when He comes in His own glory, and in His Father’s, and of the holy angels. Luke 9:26

“Men of Galilee, why do you stand gazing up into heaven? This same Jesus, who was taken up from you into heaven, will so come in like manner as you saw Him go into heaven.” Acts 1:11


So Christ was offered once to bear the sins of many. To those who eagerly wait for Him He will appear a second time, apart from sin, for salvation.  Hebrews 9:28


But the day of the Lord will come as a thief in the night, in which the heavens will pass away with a great noise, and the elements will melt with fervent heat; both the earth and the works that are in it will be burned up. 2 Peter 3:10

“And behold, I am coming quickly, and My reward is with Me, to give to every one according to his work." Rev 22:12

These are just a FEW of the hundreds of prophecies that relate to Jesus's second coming and the end of the age. Why should we believe them? Maybe because OVER 300 prophecies of His First coming were completely and accurately fulfilled!! (  Prophecies Fulfilled ) And my guess is God's not going to drop the ball now.

So, how close are we to this big event?  That's a topic for another day!!  But let this encourage you. Jesus IS coming again. He's coming to gather His children and make all things new. It could be tomorrow, next year, ten years from now or after we die. It doesn't matter!  If you are a follower of Jesus, you are already living in Eternity! What a great way to start the new year!
Posted by MaryLu Tyndall at 12:30 AM