Author Laurie Alice talks about Broken Hearts and gives away one of her books!

WINNER OF DRAWING was BONNIE!!  Chosen by Random.org   I wanted to thank you all for leaving your comments on this post. I read every one.. and several brought me to tears! I'm in awe of what so many of you have suffered and how God's love has seen you through.

Many of you know that Laurie Alice Eakes is one of my favorite authors, so I am beyond honored to have her here on my blog today.  Her latest book, Choices of the Heart, is in my opinion, one of her most emotionally stirring. It is the third and final book in her Midwifes series, all three set in the early 19th century. I'm hard pressed to choose my favorite among the three, they are all sooo fabulous in different ways. If you've read the first two, you'll be thrilled to know that Laurie gives us a glimpse into the lives of the couples from the other books in this new installment.

Rather than waste time here with my own review of Choices of the Heart, if you're interested, click on this link from Amazon. And while you're there, why not pick up the book for yourself!

For those of you who aren't familiar with Laurie Alice Eakes, she fulfilled her dream of becoming a published author with a dozen books and novellas in print and more on the way. A graduate of Asbury University and Seton Hill University’s Writing Popular Fiction graduate program, she also teaches writing and gives inspirational talks to women’s groups. She lives in Texas with her husband, dogs, and cats, where she enjoys long walks and the beach as often as possible, and knits—rather badly.

And now without further ado, here's a brief blurb on the storyline and a GREAT article by Laurie about broken hearts. 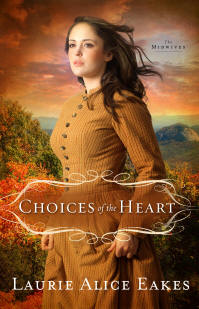 She thought she had left her old life behind . . .

Esther Cherrett comes from a proud line of midwives and was trained by her mother to take over the family calling. But when a terrible scandal threatens all she holds dear, Esther flees, taking a position as a teacher in the wild western mountains of Virginia. But instead of the refuge she was seeking, Esther finds herself in the midst of a deadly family feud—and courted by two men on opposite sides of the conflict. All she wants is to run away again.
But could it be that her past holds the key to reconciliation—and love?
In this gripping story of trust, deception, and bittersweet loss, you’ll discover the true meaning of choices of the heart.


How Do You Mend a Broken Heart

“And how can you mend a broken heart?
How can you stop the rain from falling down? …”

As I sit down to write this post and share some thoughts from Esther Cherrett’s point of view, that song runs through my head, for Esther has a broken heart, and rain has been tapping at my office window here in Texas for about eighteen hours. That’s all right. We need the rain.

Before I start on This old song, I looked it up and discovered that the same week the B.G.s had this song as a #1 hit, John Denver had #3 with “Take Me Home Country Roads”. What makes this interesting is Choices of the Heart takes place in what is now West Virginia. In 1842, it was pre Civil War and thus WVA hadn’t yet seceded from Virginia. Regardless, it’s still one of the most beautiful places I have ever been.

That bit of 70s trivia behind us, let me talk about Esther Cherrett’s broken heart.

She isn’t spurned by a man she loves. On the contrary, Esther is as shockingly gorgeous as her father was in Lady in the Mist. She’s a wee bit spoiled, being the long-awaited daughter after a handful of brothers, and can be more than a wee bit arrogant.

And then tragedy strikes, and Esther is on the run. No one is after her. She’s not in physical danger. But her heart is broken, and she convinces herself everyone will be better off if she gets as far away from anyone who knows her and her past as possible.

Within weeks of fleeing into the Virginia mountains, Esther learns her past has caught up with her. Her secret is not a secret to everyone. She wants to keep running. . .

Esther keeps herself busy. She draws, she practices some of her midwife skills, she teaches, she learns music, she explores the gorgeous mountain terrain of southwest Virginia. She reads books. She does everything she can to keep herself from thinking about the past and planning on a future.

I wrote this book beginning in November of 2011 after a year in which I had seen my heart wrenched in two and then shredded again. My trust in someone was damaged so drastically, I didn’t think it could ever mend. It wasn’t the same situation as Esther’s, and heartbreak is heartbreak. And having suffered it, writing about it proved painful more often than not.

By the time I finished this story, though, my heart was on the mend, so I could show Esther finding her way back to wholeness, and it takes a great deal more than a prayer and reading one Bible verse, or even a lot of them. It took her seeing how others healed with the Grace of God, how others suffered and did not lose their faith, how others took Ecclesiastes 4:9-10 seriously and held one another up, and it took others learning the truth and still caring about her—flaws and all--for her to find her way back to the healing of God’s love and forgiveness.

Before I give too much of the story away, I divert from Esther to the general, here and say that, when one is truly suffering, when people say “Pray about it and Jesus will bring you comfort” feels like a brush-off. As true as those words are, when one is truly hurting, one needs a body with skin on, and that is why the Bible says again and again to comfort one another, encourage one another, reach out to one another. Though how we live our lives, live through our pain with our faith in tact, we are God’s messengers of how He heals broken hearts, broken lives, broken connections with the lifeline of God’s loving, forgiving Grace.

How has God revealed to you, His love and ability to heal a broken heart?

Laurie is graciously giving away a copy of ANY of her Midwife series. In order to enter to win, please answer her question in a comment and leave your email address. Print books only mailed in the USA. Outside USA, ebooks will be sent.