A Vow Fulfilled - And huge giveaway!

Today is Chapter 3 of our FREE serial story, A Vow Fulfilled!!  I hope you're enjoying it so far. If you missed the past two chapters, you may want to go back and read them so you'll be caught up with the story. Also, if you haven't already, you'll want to leave comments on those sections so you'll be entered in the contest for the GRAND Prize!  Which includes all these items donated by the authors of this story 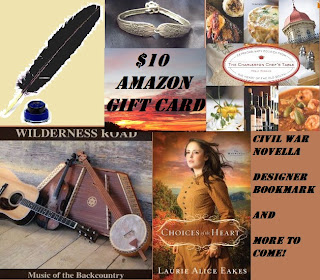 Every time you leave a comment on each of these chapters, your name is entered. The winner will be drawn on ... and will receive all of the above!

Click to go back and read:  Chapter 1  or Chapter 2 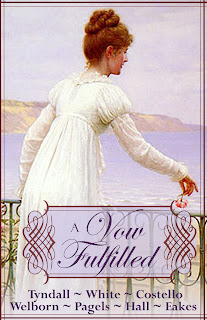 A second shot pierced the air. Mr. Cane’s stomach muscles tightened beneath Celia’s hands. She pressed her head against his back and breathed in his woody-spice scent. Her heart raced and joined the rhythm of the horse’s feet thudding on the ground.

Lord have mercy on her. Was kidnapping and attempted murder God’s punishment for her making such a foolish vow to Him? She should have listened to her parent’s advice when Mother repeatedly told her to watch each word that left her mouth and Father urged her to honor her vow with each engagement. But she’d always put her whims above that of her parents’ counsel.

If she had listened she wouldn’t be on the back of a horse dodging bullets with her kidnapper. She shifted in the saddle. If she could walk when she got off this horse she could consider herself lucky. She pushed back and caught a glimpse of crimson. She gasped. Even in the fading light she recognized the thick liquid dripping from his arm and splotching her dress as blood.

“You’ve been shot!” Celia leaned out, attempting to get a glimpse of his face.

“It’s only a grazing so don’t get your hopes up, my dear.” He threw the words over his shoulder. “You might want to keep your head tucked in. Head wounds are usually fatal.”

Celia jerked around and peered through the dusk for the enemy. A glimpse of red against the trees told her they still followed. “Can’t you go any faster? Whoever wants to kill you hasn’t given up and I don’t want to be an innocent victim to whatever you’ve gotten yourself into.” How quickly circumstances changed. Her kidnapper went from capturer to rescuer. She snorted. But then again if he hadn’t kidnapped her she wouldn’t be in this predicament!

“What makes you so sure he’s after me?” He slammed his heels into the horse’s sides, spurring him on.

“Because I have done nothing that would make a man take aim at me.” The horse’s hooves dug into the soft ground throwing up clods of dirt as they moved across the open field picking up speed.

“I’d not be so sure of that, my dear. After all, you have brought on your own kidnapping.”

“Well, I never!” Celia put as much space between the two of them as possible. The nerve of the man, first he kidnaps her and then he accuses her of drawing the fire. Why she’d always been hospitable to people—even the men with which she’d broken the engagements.

He chuckled. She couldn’t believe her ears or rather she felt it more in her hands than heard it, but the man actually chuckled in the midst of all this danger.

“Would you like to tell me what man you spurned and made so angry that he’d rather see you dead than married to another?” Mr. Cane yelled back to her.

The idea was ludicrous. So why did it leave a seed of doubt in her mind? After all, someone had planned her kidnapping and she would have never believed that either. It couldn’t be Allen. They were much too young when she broke it off with him. He’d not hold a grudge. Besides, he had joined the Navy and gotten his sea legs and wasn’t around now.  Thomas had married Elsie and they had two lovely daughters and another child on the way—no apparent regret over losing her there.

She mentally scratched both of them off her list. Mr. Cane had never even heard the name of Gregory, so it looked like he wasn’t her culprit either. That left Jonathon and Milton. Milton’s weak personality didn’t portend to him being the mastermind behind a great kidnapping scheme. The most she’d ever heard him conspire was when his mother had discovered he’d spent an evening gambling and he’d tried to whine his way out of it. She checked him off. Jonathon must be Mr. Cane’s cousin.

“Jonathon!” She was quite pleased with her deducing skill.

“Ah-ha. So you have made a man angry enough to shoot at you. Perhaps, I should just let you off here.”

“You can’t do that. You wouldn’t get your ransom. And I was inferring that Jonathon is your cousin, not that he is the man shooting at us.” She lifted her chin.

“You already said your father wouldn’t pay a ransom.” He handled the horse with ease through the trees not hesitating on the route to take.

“You sir, are a manipulator of words. I said I would not be so certain my father will pay for my return. He was rather angry with me last night.” Mr. Cane might be her kidnapper, but she definitely didn’t want him to drop her off in the middle of the woods with some mad man chasing them down. A shiver went up her spine. He seemed the lesser of two evils.

His hand covered hers where she held on for dear life. He patted it as if he’d felt her tremble. “Fathers get mad, but they still love their children.” His voice softened. “He’ll be grieved even more now that you are gone. I’m sure he’ll receive you with open arms just like the father and the prodigal son.”

Mr. Cane maneuvered the horse through the dense underbrush and heavily wooded area, weaving around fallen trees and limbs. She no longer had a clue in the direction they headed. If she did manage to escape, she’d not know in where to run.

“Just return me to my father. I’ll tell him you saved me from the man who is chasing us. You were even wounded as proof. I’m sure he will reward you handsomely for it. That is if you believe what you just told me.”

“Such an innocent flower.” He twisted in his seat and brushed the back of his finger over her cheek. “If only that were possible. For I begin to believe my cousin has lied to me. But my hands are tied. I must deliver you to him as much as that grieves me.”

Her stomach flipped as skin met skin. Her body betrayed her with her captor. She gritted her teeth. One didn’t give up a perfect man for someone who went around kidnapping women at the whim of his cousin. “What does Jonathon want with me?”

“Jonathon? Who in tarnation is Jonathon?”

“I thought he was your cousin.”

“No cousin with that name that I know of.” He flicked the reins, guiding the horse between two large trees and under a low branch. “Duck your head.” He bent low, flattening his body against the horse’s neck.

In shock that she still didn’t know who had her abducted, she didn’t comprehend his last words until it was too late. The force of the branch striking her forehead thrust her backwards. Had she not had a fierce grip on Mr. Cane, she would have tumbled off the horse. She sucked in her breath as a sharp pain threatened to steal her consciousness. Closing her eyes, a tear slipped out, sending a warm trail down her cheek.

“We’re here.” He pulled the horse to a stop and jumped down.

A single bird could be heard off in the woods. Celia concentrated on its songs, trying to overcome the pain. The joyful chirping faded and she forced open her eyes, expecting to see Mr. Cane waiting on her to dismount.

Instead he gawked. She followed the direction of his gaze to her ankles peeking out from beneath her hiked up dress as she sat on the saddle. She tugged at the fabric in an attempt to lower the hem over her slippered feet. “Would you be so kind as to help me down?”

He slowly drew his eyes up to lock with hers. He lifted his arms. “By your leave.”

She couldn’t move. In the excitement of being abducted and shot at she had forgotten her promise. Now as if to cement her vow the man used the same phrase a second time. He arched a brow and she glanced at the dangling reins. Perhaps she could slide forward and kick the horse into motion, leaving behind this man and her vow.

As if he’d once again read her mind, he reached up and pulled her out of the saddle. Her feet hit the ground, but he didn’t release her. He towered over her like a great oak tree. She tipped her head back and glared. Her knees quivered.

He frowned. Then gingerly brushed his lips over her forehead. “You didn’t duck.” He wiped the tear with his thumb.

Her breath caught in her throat.

Turner Cane lowered his hand and spun around. He stepped aside revealing the truth of why she was there. “I assume you know William, my cousin.”

The man sneered. “I believe she knows me better as Gregory.”

Leave a comment with your thoughts on this chapter to be entered into the grand prize drawing! (Don't forget to leave your email so we can contact you!)

Click HERE tomorrow to read Chapter 4 of A Vow Fulfilled!!!