What has happened to Fathers in this culture? Where are the good Dads? I'll grant you, there are a few here and there, sprinkled about society, but honestly, fatherhood, true fatherhood, seems to be on the decline.  What do I mean by a good father? Here's just a few things that come to mind

A mother's job is equally important, but different. God calls fathers to do the leading and the teaching, to raise up Godly kids. It is the man's job to be the spiritual leader of the home. 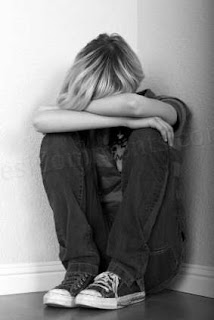 Yet I see so few who are even doing half of what I've listed her. The result? Kids who grow up insecure, lost, lazy, confused, seeking meaning in what the world offers instead of where real life is found.

I grew up without a father. He was alive and around but he had no desire to see me or know me. For a young shy girl, that was devastating. I didn't realize it at the time, but I ended up being extremely insecure, had very little self-worth, had no idea who I was or what I was doing, and I craved a father's love so much, I sought it in a series of bad, damaging relationships.

Yet I see so many kids who have fathers at home, but their fathers are either abusive, neglectful, or really what I would call "The Provider" because that's all they do. They bring home the pay check that supports the kids.  I don't know which is worse. Not having a dad at all or having one who acted as though I didn't exist!  Then of course there are those who belittle and beat their children, which is abominable. Most of those kids grow up seriously messed up.

God knew the importance of fathers. He fashioned the family after his own existence as Father, Son, and Holy Spirit.
For this reason I bow my knees before the Father,from whom every family in heaven and on earth derives its name Ephesians 3:14-15

God knew that many human fathers would fail their kids. It is a result of man's fall and the wickedness of our hearts. 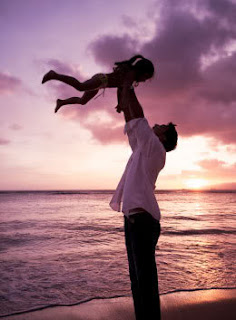 Last week in church we sat behind a man and his daughter. She was probably around 13 and he was in his 40s. Several times during the service he would lean and tell her something and she would nod and smile. A few times they held hands. One time he leaned over and kissed the top of her head. Toward the end of the sermon, she snuggled up against him and he put his arm around her. Watching this from behind them, I nearly cried. I never knew a father's love or protection and the sight of such a tender display really touched me. But then I realized that I do have a Father. I've always had a Father. I just didn't recognize Him most of my life.

Yea, yea, you may say. God is my father... I've heard that before. He's everybody's father. And besides He's in heaven. I'm here. But that's not true. He is in you, and around you and everywhere. And He is uniquely your Dad. Why? Because He created you with His own hands before you were born. He fashioned you just like you are because He knew He would adore you!  He is your Dad! If you go back up and read the list of what a good Dad does, I'm sure you'll see that He does all that and More!! 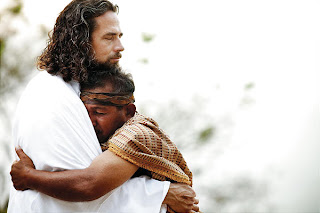 Whether you had a good dad or a bad dad or no dad at all, I urge you to start thinking of God as your Dad. Start addressing him as Father, Dad, or Abba. When you're praying, picture Him wrapping His big Daddy arms around you like a father would a precious child, picture Him smiling with glee when He sees you, opening his arms wide so you can run into them, listening with rapt attention to what you are saying, and laughing when you laugh. He is a Father. He is the first Father, the only real Father, and the one true Father.

If you'd like to hear one young lady's struggle with having an absent father, click here.. you'll be glad you did. Her story really touched me!
Posted by MaryLu Tyndall at 12:30 AM