Wash all of me, Lord! 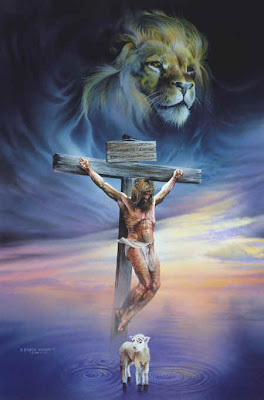 Today we celebrate Good Friday, the day Jesus was crucified. The spotless lamb of God, God in human form, allowed Himself to be tortured and then brutally murdered by His own creation.

And about the ninth hour Jesus cried out with a loud voice, saying, “Eli, Eli, lama sabachthani?” that is, “My God, My God, why have You forsaken Me?  Matt 27:46 NKJ


When He uttered His final cry right before He died, it was 3:00 in the afternoon, which is the exact time the Jewish Priests killed the passover lamb at the temple. Amazing, isn't that? Yet, there are close to 30 prophecies in the Old Testament which foretold in the most astounding detail many of the events of Jesus's last days: How he would be betrayed, how his beard would be plucked out, how he would be scourged until He didn't even look like a human, how He would be insulted, how none of His bones would be broken, how He would be pierced, how the guards would gamble for His clothing.. .etc.  The odds of them all being fulfilled is astronomical!Yet they were.

But I want to focus on something that happened the day before Jesus went to the cross. The day of the passover meal with his disciples. The night of the last supper.

Jesus, knowing that the Father had given all things into His hands, and that He had come from God and was going to God, rose from supper and laid aside His garments, took a towel and girded Himself. After that, He poured water into a basin and began to wash the disciples’ feet, and to wipe them with the towel with which He was girded. John 13:3-5 NKJ

In Jesus's day, people in Israel wore sandals. It was a very dry climate and the roads were dusty and dirty. Along with people, lots of animals traveled through the town's streets and the highways, so you can imagine how messy and stinky your feet would get!   Whenever someone entered a home, the 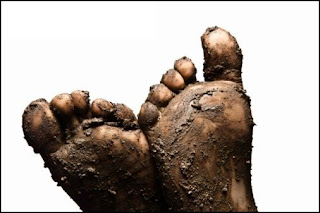 first thing they did was remove their sandals and have their feet washed. This was done by the LOWEST ranking servant in the house because it was considered the worst job imaginable. Can you imagine having to clean dirty, smelly, sweaty, mud and manure-encrusted feet?  Yuk!!   It was a horrible job.

Yet when Jesus and His disciples entered the room where they were to have the Passover meal, there was no servant to wash their feet. What I find interesting is that NONE of the disciples offered to do the dirty job.  Why would they? They were the disciples of the Messiah! They were far too important to be washing feet! In fact, not long before they got to Jerusalem, the disciples had been arguing about who was the greatest among them!!  (Love these guys!)

So, here they are all reclining around the table. No chairs. Back then, they sat on the ground with their feet off to the side. I'm sure the smell from those dirty feet must have been atrocious.  Jesus looks over His disciples, knows that Satan has already told Judas to betray Him, knows He is going to suffer the worst imaginable death the next day, and what does He do?

He doesn't think about the pain, the betrayal, the rejection, the horrid death. He doesn't think that EVERY one of His disciples will abandon Him. No, He knows Who He is and where He's going. And He rises and takes on the role of the LOWEST servant and washes all the disciples dirty feet.

Why? I think there were four main reasons.
When Peter asked Jesus what in the world He was doing? Jesus told him that Peter didn't 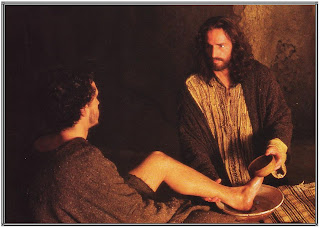 understand now, but that he would understand later.
I love Peter's response
Peter said to Him, “You shall never wash my feet!”
Jesus answered him, “If I do not wash you, you have no part with Me.” (In other words, if you don't accept my sacrifice for you, you cannot receive my salvation)
Simon Peter said to Him, “Lord, not my feet only, but also my hands and my head!”


This kind of self-sacrificing, self-effacing, undemanding, unconditional pure love is so foreign to our human hearts, we shake our heads at these stories. Our love, by comparison, even for our own family, falls so short.  Today, as you ponder what Jesus endured on the cross, take some time and think about the love that put Him there. The incredible, unfathomable love He has for you and me.  If He loves us that much, what do we have to fear?