Please welcome today, author Carrie Fancett Pagels who has just released her very first book!!! It's a Civil War Romance. I recently read it and believe me, you're not going to want to miss  this one!

Return to Shirley Plantation is Volume One in a monumental Civil War series written by some of today's Best authors. A new story will be released every two weeks, so you won't have to wait long for the next installment. Carrie had the privilege of leading the pack with her marvelous story. Here's a little bit about it: 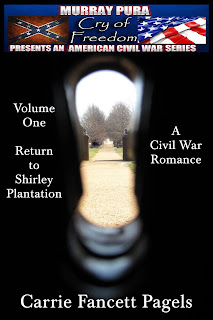 Abducted against his will, Matthew Scott is conscripted into the Confederate army because of his Copperhead father’s political leanings. After being injured at Malvern Hill, Matthew is taken by the Union army to Shirley Plantation in Virginia where he is tended by seamstress Angelina Rose, a freed slave. Although given an opportunity to leave the South and start a new life for herself, Angelina remained for the sake of her sister’s orphaned twins who are still enslaved. Will Matthew’s return to Shirley Plantation settle a mystery concerning his father’s past? And help Matthew find the family he longs for

Now for My Review:

This short novella was a pure joy to read.  I found myself completely enamored with the story, the characters, the secrets and mystery, the endearing love and the history! The author's exquisite attention to historical detail will make this a delight for all historical fiction readers. The romance will draw in those of us who are die-hard romantics, and the suspense will keep the rest of you itching to turn the page. All in all, a well written, fascinating look into life on the Shirley Plantation in Virginia during one of the worst times our country has experienced. Despite the horrors of war, you'll come away feeling satisfied and hopeful and longing for more.


Now, How God brought about the publishing of Carrie's book!

Miraculous provision in our work

It really does seem like a miracle the way my debut novella “Return to Shirley Plantation: A Civil War Romance” came together! First of all, I had been convicted by the Holy Spirit that I should withdraw one of my three-book proposals, out on submission (in committee with one company) and bring it back in and give the first story in the trilogy solely to one publisher, who requires exclusivity when considering.  So my agent and I did that and submitted a new one-book proposal to the editor for that line. Literally within days I got contacted by Murray Pura, on Facebook, asking if I had a Civil War story I might want to include in an anthology he was pulling together.  He had a dozen people on board for the anthology and only a couple of spots left.  Because I had pulled back the three-book proposal, I had two “orphan” book blurbs, one of which was, ta da, a Civil War story.  But given that a big part of Murray’s Cry of Freedom series was a focus on the various battles from 1863, I wasn’t sure if my story would work.  So I sent the blurb to Murray.

Very quickly, he replied that he was interested. Because I’ve had an ongoing relationship with the staff at Shirley Plantation, I was aware of and had purchased an excellent book by Julian Charity that was published last summer.  I read the Civil War section of the book and determined that my story would have to begin in 1862.  I asked Murray and he said as long as I finished it in 1863 we should be okay.  This was in Mid-February and he wanted the books to begin publishing in early April.  So we were looking at less than six weeks away.  Projects could range from 7K or so to 25K—either short stories or novella-length preferred.  I set out to do a short story based on my blurb.

First I frantically called Julian Charity at Shirley Plantation and begged, “Please, can I come out and see you and talk about the family during the time the plantation was occupied as a field hospital?”  He laughed—and agreed! So I drove the 75 minutes out there and Julian met with me. He and Randy Carter also gave me a tour of the second and third floors of the house (I am a Shirley Plantation supporter and this is a special perk that is allowed—something new they are doing, with memberships at different levels.) Then Julian and I had lunch and chatted some more about the Civil War at Shirley Plantation and in the area.  By the time we were through I had an excellent feel for what was going on there and felt very grounded in the setting and time period.

On the way back I called Kathy Maher, who was also signed on for the anthology.  She gave me more advice, some excellent stuff, and also agreed to be my critique partner (this is another writer who checks your work and you swap chapters back and forth with each other.) I have to say she was the easiest crit partner I’ve ever worked with. We’d match each other and send the same amount of work and turn it around in the same amount of agreed-upon time.  We also both decided to change from short stories to novella length because we had too much story for a short.
Under six weeks from start of this project to publication of my ebook on Amazon. A miracle.  And I am so grateful for the help God sent my way to make this possible.  And I am glad for my obedience to His prompting along the way!

How about you?  How have you been blessed by obeying God’s prompting? And has He given you a miraculous blessing because of doing so?

GIVEAWAY: PDF copy of “Return Shirley Plantation: A Civil War Romance” an Amazon bestseller in Hot New Civil War history!   Also a copy of Julian Charity’s book “Courage at Home and Abroad: A Military History of Shirley Plantation” and beautiful notecards from this historic site.
And MaryLu is giving away a FREE Kindle copy of Carrie's book too!
Leave your comment below in answer to Carrie's question (with your email address) and I'll choose two winners next Friday!

Carrie has a Ph.D in School Psychology. But don't let her genius intimidate you! She's one of the sweetest, most generous people I know! 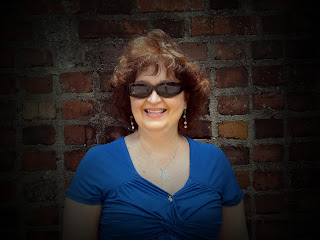 Carrie Fancett Pagels (www.carriefancettpagels.com) writes “romantic” historical fiction.  Carrie’s debut release “Return to Shirley Plantation: A Civil War Romance”
is a best seller and part of a multi-author anthology headed up by Murray Pura. Carrie is represented by Joyce Hart of Hartline Literary Agency and is owner/administrator of two group blogs: “Colonial Quills” (http://colonialquills.blogspot.com) and “Overcoming With God” (www.overcomingwithGod.com). Carrie was a psychologist for twenty-five years. She is a contributor to a nonfiction anthology God’s Provision in Tough Times by Cynthia Howerter and La-Tan Murphy, releasing in June 2013 http://www.amazon.com/Provision-Cynthia-Howerter-La-Tan-Murphy/dp/1938499441/ref=sr_1_1?ie=UTF8&qid=1358266747&sr=8-1&keywords=cynthia+howerter

Where you can find Carrie!!