Heaven, Hell, Paradise? What did Jesus do after He died? 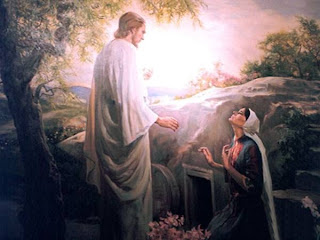 After Jesus rose from the dead, remember the scene in John 20 where Mary sees him, thinks he's the gardener but then when he speaks her name she realizes he's the Lord and she clings to him?  It's such a touching story. You may recall, however, what Jesus told her: "Stop clinging to me, for I have not yet ascended to my Father..." John 20:17

So why did He tell Mary He needed to ascend before he could be touched, and then return later that day to have a meal with the disciples?  Besides didn't Jesus stay on earth for another 40 days before he ascended to heaven?  This always confused me until I read the following passage

"When He ascended up on high He led captive a host of captives, and He received (and gave) gifts to and for mankind. Now this expression, that He ascended, means that He first descended into the lower parts of the earth. He who descended is the One who also ascended far above all..." Ephesians 4:8-9

Paul tells us very clearly here that Jesus descended into the lower parts of the earth.  What lower parts, you might ask?

Often in Scripture hell is described as a place in the nether or lower parts of the earth. A person descends into hell and ascends into heaven. Yet before Jesus paid the price so the righteous could go to heaven, there was a place deep in the earth called Paradise.  This is clearly portrayed in the story Jesus tells in Luke 16 of the two men who died, the beggar Lazareth and the rich man. One went to hell, the other paradise. Both compartments were so close that they could speak to each other over the 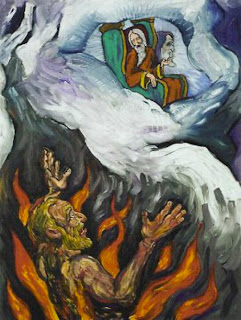 wide gulf between them.  (Notice that Abraham was there in Paradise)


Once we understand this, we realize that Jesus went down into Paradise... but to do what?

For Christ also suffered once for sins, the just for the unjust, that He might bring us to God, being put to death in the flesh but made alive by the Spirit, by whom also He went and preached to the spirits in prison,  1 Peter 3:19

To preach or the word more closely means to announce!  Jesus went to Paradise to announce that he'd paid for all their sins. They were finally free! (Those in Paradise, that is, not in hell. )
So my guess is that Jesus had just finished that task when he ran into Mary.  There was something else he needed to do before he could see everyone and be touched, and that was lead captive a host of captives.. in other words, he then led all the saints in Paradise straight to heaven. Which is why he told Mary he had not yet ascended.

But Christ came as High Priest of the good things to come, with the greater and more perfect tabernacle not made with hands, that is, not of this creation  Hebrews 9:11

Part of the function of High Priest is to enter the Holy of Holies and offer your sacrifice for the sins of the people. After Jesus's resurrection, he entered into heaven to present His sacrifice to the Father, that the Judge could declare the sin of the world paid.

Therefore it was necessary that the copies of the things in the heavens should be purified with these, but the heavenly things themselves with better sacrifices than these. For Christ has not entered the holy places made with hands, which are copies of the true, but into heaven itself, now to appear in the presence of God for us; Hebrews 9:23-24

Then that evening He went down to appear to the disciples, as He did off and on over the next 40 days until His final ascension. Paradise has been moved to heaven, leaving only Hell in the lower parts of the earth. Fascinating huh?
So when we die in Christ, we go straight to heaven..

But what parts of us go to heaven? What will our bodies be like?  Are we all part of some global loving consciousness? Do we all have wings? What do we look like?

Paul said in 1 Thessalonians 5:23  Now may the God of peace Himself sanctify you completely; and may your whole spirit, soul, and body be preserved blameless at the coming of our Lord Jesus Christ

We are made up of 3 parts operating in a trinity, just like God is made of a trinity. It is only our body that dies, but our soul (mind, will, emotions) and spirit are eternal. That's the part of us that 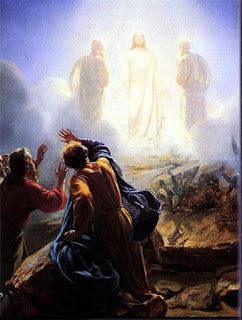 goes to heaven. We know that we will look like ourselves, though perhaps slightly different because of the many examples in Scripture where people saw the spirits of those that had gone to heaven. For example, in the old Testament King Saul spoke to Samuel the prophet who had been long gone.  In the New Testament, Peter James and John saw Jesus speaking with Moses and Elijah, and they recognized them!  And lastly, although Mary didn't first recognize Jesus in the garden, she did after he spoke. So, it's obvious we are going to be us, individuals, and completely recognizable.

Of course this is all before we get our final glorified body at the 2nd coming of Jesus.. if you want to read what that body will be like click here:  Glorified Bodies

Anyway, no real lesson in all this except to show how wonderful God is and how He made provision for those saints who died before Jesus, and how the millisecond we die, we will be escorted to Heaven, looking and being our unique selves . It's all so incredibly wonderful!!