One of the neatest things about being an author is the research trips I get to go on. Of course I'd go on a lot more (over to England, Spain, France, Brazil!)  if I had the money but what's a starving author to do?  In case you haven't figured it out, one of my greatest passions are Tall ships.  I often get asked why Tall ships? But for the life of me, I can't give a clear answer. They're majestic and romantic and they represent courage and freedom. But other than that, they're just cool.

If you haven't already, I hope you get a chance to sail on one of these great ships and hear the cannon belch! It's quite an experience and one I use heartily in the books I write.

My favorite part of the Tall Ship Festival in San Diego is always the HMS Surprise. The old beauty is stationed there permanently but she does go sailing now and then, particularly when Hollywood calls and needs a ship for a movie. (If you didn't see the pictures of her, check last week's post).  The other ship that is permanently stationed there is the oldest active sailing ship, the Star of India, a barque that was built in 1863 and was used as both a cargo and passenger ship.   Here's a few pictures I took. 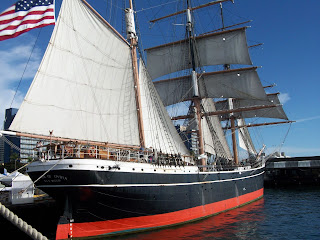 Hubby and I sailed on a schooner called The Spirit of Dana Point. Somehow I missed taking a picture of the entire ship but it is a replica of a 1770 US Revolutionary War privateer! How cool is that?

Here's a picture of it's sails raising: 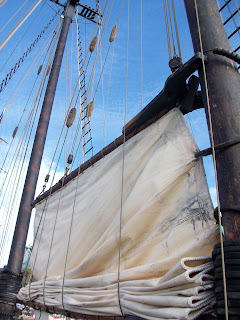 Here's the ship we fought.against. She's the Irving Johnson, a Brigantine: Isn't she a beauty?

The following are some really fun short videos. I hope you enjoy them!

Here's a short video of us firing on them!

And here's the Irving firing on us twice!!

Thought you'd like to see our gunner. She's a lady!! (of course!)

And here's the crew raising sail!  The second man hauling the rope is me hubby!

Here, our enemy has decided to try firing water baloons at us!

There was a sea-lion following our enemy! See if ye can spot him!

I pray you all have a great weekend with full sails, a clear horizon and an enemy that only fires water balloons at you!