Last weekend, my husband and I went to San Diego for the annual Tall Ship Festival!!  We had a BLAST! Literally.  I hope you enjoy a few of the pictures below.  I hope to post most or all of them on Pinterest and on my website too as soon as I can.

First, this is one of my favorite shots. The HMS Surprise at sunset. This is the ship they used in the movie, Master and Commander and also in Pirates of the Caribbean 4.

Notice the hammock in the background. The men also slept on the gun deck. Every night they'd string up their hammocks and every morning, they'd take them down. 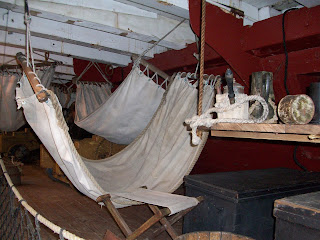 The Captain's quarters were pretty big! They were located at the stern of the ship and had beautiful stern windows as you can see looking out on the water. There was a large table, a bed, a desk, trunk and two cannons!


And last but not least! Here's a short video of part of our Cannon Battle. We were sailing on the Spirit of Dana Point, which is a replica of a 1770 privateer used during the US Revolution. The other ship that is firing on us is the Irving Johnson, A Brigantine

Have a BLAST this weekend!!!!