It only takes a second for your life to completely change!

Funny thing how God does this sometimes. I'll be reading a passage from the Old Testament and then one from the New and He shows me the connection between the two. It's normally something I would have never considered without His wise instruction. 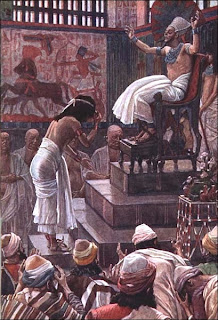 Remember the story of Joseph in the Old Testament. He was sold into slavery by his jealous brothers, ended up being falsely accused of rape and tossed into prison in Egypt. For 13 years!!  I don't know about you but I'd be wondering where God was all that time. I might even be a tad bit angry at God. I might even lose my faith! But not Joseph. God had given him the ability to interpret dreams and when he interpreted Pharaoh's dream, Joseph was escorted from the dungeons of Egypt to the palace. He became a prince and the most powerful man in the realm, aside from Pharoah.  In ONE day!!   Talk about culture shock.

Then Pharaoh took his signet ring off his hand and put it on Joseph’s hand; and he clothed him in garments of fine linen and put a gold chain around his neck. And he had him ride in the second chariot which he had; and they cried out before him, “Bow the knee!” So he set him over all the land of Egypt.   Genesis 41:42-43

Then I turned to the story in Luke where Jesus crosses the Sea of Galilee and enters the land of the Gadarens where a man who was possessed by over a thousand demons met him. When he saw Jesus, he cried out, fell down before Him, and with a loud voice said, “What have I to do with You, Jesus, Son of the Most High God? I beg You, do not torment me!”
Jesus promptly casts all the man's demons out into a herd of pigs. The townspeople gathered around.
Then they went out to see what had happened, and came to Jesus, and found the man from whom the demons had departed, sitting at the feet of Jesus, clothed and in his right mind. And they were afraid.

The gospel of Mark describes this man as such:  he had his dwelling among the tombs; and no one could bind him, not even with chains,  because he had often been bound with shackles and chains. And the chains had been pulled apart by him, and the shackles broken in pieces; neither could anyone

tame him. And always, night and day, he was in the mountains and in the tombs, crying out and cutting himself with stones.

Both stories speak of a man in prison. In the first, Joseph was tormented in a real prison, in the second, the man was tormented by a host of demons who would not give him rest day or night.

Both men were lifted from the prison to the palace in ONE SECOND.   What really struck me about this was the following:  You may feel like you're in a prison right now. Perhaps it's a prison of pain, of ill health, of no money, of lost loved ones, of broken relationships, of loneliness, misery, hopelessness....whatever it is, God can lift you up out of in in one flash!  When the time is right, usually when all seems lost, God can show up HUGE!

I've seen this happen multiple times in my own life. In fact, I'll be bold to say that God often works in this way. Quickly and Magnificently! When you least expect it. If you've been faithful like Joseph, but even if you haven't like the demon possessed man. Yet, if you fall at God's feet in worship, don't be surprised if He doesn't shake your world!

So, don't despair in the hard times. Hang in there. Hold onto your faith and onto Hope. For God is faithful. He loves you and He has not forgotten you.