When I came across the story of Fanny Campbell, I thought to myself, now this is the stuff of great romantic fiction!  Trouble is, the story is not fiction, it's true,! And I guarantee you'll find it as fascinating and romantic as I did.

Fanny Campbell was a young woman who lived in Lynn, Massachusetts in 1776.  She was just an ordinary colonial woman like any of us would have been. But she had a huge problem. Her childhood sweetheart and betrothed, William Lovell, was rotting in a jail in Cuba on charges of piracy.  His merchant ship had been captured by pirates and the crew forced into piracy against their will. Fanny couldn't stand the thought of never seeing her one true love again and especially the thought of him dying alone in a Spanish prison. 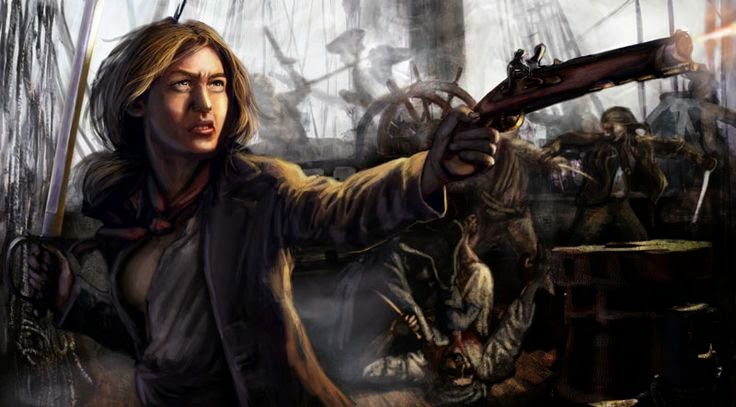 So what does she do? She dresses like a man and signed on to serve as second officer on a British Merchant Brig, the Constance!  (Yea.. just what I would have done) However, she had no idea how to get the captain to go rescue William from Cuba. But it would seem God was on her side because both the Captain and the first mate had secret intentions to sail the Constance to England and impress the entire crew into the Royal Navy!  When Fanny got word of this, she encouraged the captain to do just that while alternatively, she informed the crew of his plans and incited a mutiny!

Fanny became the new commander of the Constance and headed for Cuba. Along the way they encountered a British bark, the George, the captain of which sensed something was not quite right on the Constance and open fired. Though the Constance was undergunned, they (under the leadership of Fanny) won the battle and took the George as prize. Now, they were officially pirates!

Fanny immediately sailed for Cuba, and with the help of her crew, rescued her betrothed and several other Americans!  Finally the happy couple was united, but they kept Fanny's gender a secret from the crew. (Can you imagine the look on William's face when he first saw his fiancee, dressed like a man, leading a charge of men to rescue him from prison?)

On the way home, the Constance and George, still under the command of "Captain Channing"  took another prize, a British merchant ship that had news that war had broken out between the colonies and Britain. Declaring both her ships privateers and no longer pirates, Fanny sailed back to Massachusettes where she obtained the proper papers commissioning the two ships as privateers.

Fanny and William went home to Lynn and were soon married. While William went off to privateer during the war, Fanny remained home and eventually became the mother of several children.
And they lived happily ever after!!!!

Posted by MaryLu Tyndall at 1:28 PM