This is a warning to anyone who takes frequent flights or who is considering flying anywhere soon. American Airlines is the worst airline I've ever had the misfortune to fly upon. I recently took a trip from San Jose, CA to Knoxville, Tenn to visit my Mother.  Brace yourself for the horrid details of my trip. Everything I'm about to tell you is true. Names have not been changed to protect the innocent!

I booked a flight from San Jose to Knoxville with one stop in Chicago, and then a week later, back from Knoxville to San Jose with a layover in Dallas.  All along the way there seemed to be something wrong with every airplane I boarded. It started in San Jose where the plane sat on the tarmac for nearly an hour with absolutely NO explanation as to the cause.  By the time we landed in Chicago, I found myself sprinting through the crowded airport in a mad frenzy to make my connecting flight.

Upon arriving at the gate, I waved my boarding pass and approached the desk informing the attendants that I was on the flight to Knoxville. The lady behind the desk barely looked up at me and mumbled that the flight had already left. Stunned, I simply stood there for a minute, unsure what to do. After my heart settled, I asked her about my luggage since I assumed that it had not transferred either.

"Oh, it will be in Knoxville," she said, half-listening to me and half-talking with her friend.
"But I won't be in Knoxville," I replied.
Finally, she looked up at me and with a huff of frustration began typing on her computer. "Oh," she says. "You're booked on the next flight to Knoxville." The sound of a printer chimed and she handed me a slip of paper. "At 9:30 pm"
It was only 3:00 pm.  Grabbing the boarding pass before she changed her mind, I headed off to spend six hours in the Chicago airport.

Have you ever spent 6 hours at O'Hare airport?  Not the most pleasant place to hang out. And they didn't even have free Wi-Fi! I ate bad airport food and walked around on shoes that gave me blisters. (My fault for wearing new shoes)  It was the longest 6 hours of my life! There were few stores and fewer restaurants and mobs of people crowding every causeway.  To make matters worse, my new flight would put me in at Knoxville after midnight, so I had to ask poor Mom and Sister to come pick me up. Yet, I finally made it there, exhausted and smelling like greasy food and stale coffee.

Whew! I was finally in Tennessee!  I had a marvelous time with my family. A wonderful week of eating and relaxing and catching up.  When they dropped me back off at the Knoxville airport, I was sure that the flight home couldn't be as bad as the flight there.

Bad Omen: The flight leaving Knoxville was delayed... something wrong with the plane again. (Geez, not sure about the safety of these planes!)  Yet, Thank God, we finally took off about 20 minutes late. No problem. My layover in Dallas was 3 hours. I had plenty of time.  So, I got to Dallas, found my connection gate, grabbed a bite to eat, and eventually boarded the plane in good time. Things were looking up!  I settled comfortably in my seat and checked the time. Wait. Why was the air inside the plane so hot? And getting hotter by the minute. Something was terribly wrong. Several minutes passed, then a half hour, and sweat began streaming down my neck and back. I was starting to feel claustrophobic and people around me were beginning to grumble and ring the bell for the attendant. I looked around and several older people looked like they were going to faint.  I'm not kidding when I tell you that  it was close to 90 degrees in there. 40 minutes went by and people started charging the front door. The attendant would NOT allow us to get off the plane. In fact, she told everyone in a very rude tone to sit down and buckle your seat belts!  Which was really ridiculous since we obviously weren't moving.  Lies were told about refueling, maintenance, etc, but by this time, I wasn't believing a word they said.  More time passed and it looked like a mutiny was brewing.  The flight attendant shouted,  "If you all want to get off this plane, you should know that there are no other flights to San Jose."  as if she was scolding us for our behavior and warning us of consequences.

No water was provided. No apology. Nothing. Finally when several more people headed toward the front, she came over the loud speaker ordering us all off the plane. Ordering us as if we were cattle. So, I deboard with the rest of the people and we all crowded around the gate, waiting for some information.  The flight was still listed up on the board, but now it said delayed an hour.

Fine. I can wait an hour. I just wanted to get home!  But then after an hour, it changed to delayed another hour. Now, I'm starting to get worried. Finally after another hour, it said the flight was  cancelled. By this time, it was nearly 7:00 pm and too late to book a flight on another airline.  Still there was no apology, no offer to help.  I was standing there all alone with no idea what to do. I was stressed, tired, angry, and fearful, but when I saw everyone jumping into a line, I jumped in after them. Turned out it was the rebooking line where they were also handing out hotel and food vouchers for the night.

After standing in that line for an hour, I finally made it up to the lady. (On, and by the way, they only had ONE lady doing all the rebooking. )  She still made no apology and handed me my vouchers and told me that I was booked on a flight out at 6:00 AM the next morning. I was shocked because I overheard her tell several people before me that she had no more room on any flight to San Jose until the following night. I silently Thank God for booking me in advance.  (He was with me through all the madness! More about that in another post)

Ah.. but it gets better.  It turned out that the food vouchers were only $6 a meal.  That's $6 for dinner! There was no place in the airport where you can find a meal for $6, unless you wanted to get a bagel and coffee. So, I ended up paying an extra $4 for a chicken salad. (Which I never ate due to a nervous stomach)

Mind you, I was extremely stressed. I don't like being away from home and I get nervous being alone in a strange city. So, I was literally shaking in my boots and uttering nonsensical prayers to God for help!
God sent me some people to hang out with who were in the same predicament. We waited over an hour for the hotel shuttle to arrive. Finally, we got to the hotel close to 10:00 pm.

It was the sleaziest, dirtiest, most horrible hotel I have EVER stayed in. This is a hotel you wouldn't put your worst enemy in.  There was some sort of electrical tape all over the hallway floor, the carpet 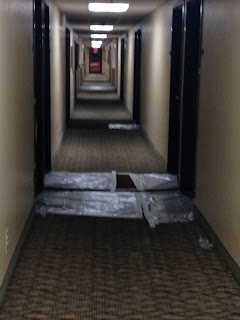 in my room was greasy (Yes, greasy!) and the entire place smelled like spoiled milk.  Oh, and did I mention the airline would not give us our luggage?  So I had no change of clothes, no toiletries, not even a toothbrush. There were people with me who needed the medications in their luggage, but were told they couldn't get them.

Well, at least I wouldn't be there long because  I had to get up at 3:30 to catch the shuttle back to the airport.  I actually feared there were bedbugs in the bed. Needless to say, I didn't sleep.

The story does have a happy ending. With less than two hours of sleep and in the same clothes for 48 hours, I caught my shuttle and then my flight (although it was delayed an hour due to lightning) and I finally got home a day later then I was supposed to, exhausted, dirty, and stressed.

Now, I understand that sometimes airplanes malfunction and need maintenance. I understand that sometimes flights get delayed and/or cancelled.  I get that. What I don't get is why it had to be EVERY single flight I took on this trip. NOR why every American Airlines employee was nothing but RUDE, CONDESCENDING, UNCARING, UNPROFESSIONAL, and flat out MEAN.   Then to add insult to injury they give us barely enough money to eat and set us up in hotel that a homeless person would have walked away from.   How these people stay in business is beyond me, but I intend to let everyone I know what happened to me and advise them to never book a flight on American Airlines!


(Back to our regularly scheduled Monday post next week).