Are you still playing with a sand castle when there's a magnificent castle right in front of you? 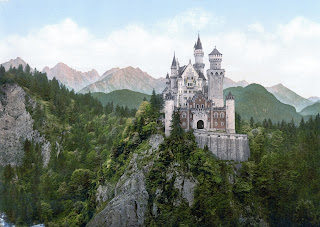 This is a question I often ask myself, because, honestly, on many days, in fact on most days, I feel like I'm missing out on so much in my Christian walk. The Lord gave me a vision once of me sitting outside a huge, magnificent castle with towers that rose to the sky, looming stone walls, colorful flags and sounds of pageantry and laughter coming from inside. The gate was open for me to enter, but instead, I was sitting in the sand constructing a sand castle. In other words, God has so much more for me in this life, so many more adventures and abundance, but I was content to play in the sand.

Unfortunately, I believe that's the case for most Christians today, at least in the West. There's a disconnect between the Christian life we read about in the New Testament and the one we live day to day. Something is missing. Something is lacking. Where is the passion for Jesus, the miracles, the adventurous life so many of the early Christians experienced? We may get hints of it here and there, depending on what type of church we attend and what type of Christians we hang out with, but honestly, when's the last time you saw someone raised from the dead? When's the last time people clambered to get in your shadow so they could be healed? Have you ever shared the gospel to a crowd and hundreds of people got saved? Me either.

Remember the rich young ruler who approached Jesus asking Him what he needed to do to have eternal life?  Jesus told him to keep God's commandments, to which the rich man said that he already did. Hmm. Really? I believe Jesus stopped at this point and studied the man, seeking counsel from the Holy Spirit as to how to proceed. The man's problem became apparent. His money was his God.  So, Jesus told him to sell everything he had, give it to the poor, and come follow Jesus.

Mind you, Jesus didn't ask everyone to follow Him. In the beginning of His ministry, hundreds followed Him around, but He actually only chose 12 men to be His true disciples. So, when He asked this rich man to follow Him, it was a huge privilege.   But the man went away sad because he wasn't willing to do that.

Yet how many of us ignore God's invitation to come up higher with Him? (to enter the castle)  How many of us ignore His invitation to truly follow Him because it means we will have to give up something... our time, money, safety, comforts, etc... ?  This rich young ruler went home and probably lived out his days in the comforts of his wealth. I imagine it was a pleasant life, but perhaps a rather dull, ordinary one without anything significant to mark his passing.

Do you ever wonder if you're so attached to your money or comforts that you are missing out on everything God has for you in this life? I'm not talking about wealth or privilege or comfort. I'm talking about what makes life worth living. Purpose, destiny, doing the real work of God Himself. In order to do that, though, we have to be "all in". We have to be willing to give up our entire life to Jesus and do whatever He says. It's a terrifying prospect. But the alternative is a ho-hum Christian life.

I want to enter the castle and stop playing in the sand. How about you?