Happy Friday all!!  I hope your week was wonderful.  Today I have a special announcement. I have edited and polished up The Raven Saint and it is now available for PREORDER  at a SPECIAL PRICE!

You can purchase the E-book version of The Raven Saint for only $1.99 until next Monday, September 14th, when the book releases and the price goes up to $4.99.  That's HALF PRICE for the next three days!!

If you haven't heard of The Raven Saint, it's the third book in my Charles Towne Belles Trilogy, but you DO NOT have to read the first two books in order to enjoy this wonderful story. Each book is self-contained with very little cross-over of characters.

Here's the new cover (which some of you helped me create!)  and a little bit about the story.  Isn't the cover Fabulous!??? 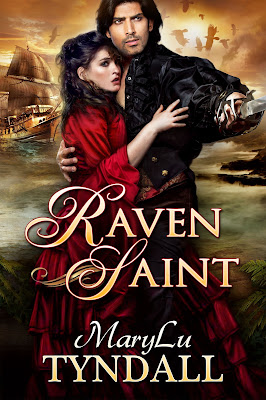 I expect to have it up on Barnes and Noble soon. Also the new Paperback will be available within the next few days.

If you haven't read the first two books in the series, you're in for a treat with this trilogy! Aside from my Legacy of the King's Pirates series, this is a fan favorite!

Thanks everyone!!  Have a great weekend!