Are you building your house on sand or rock? 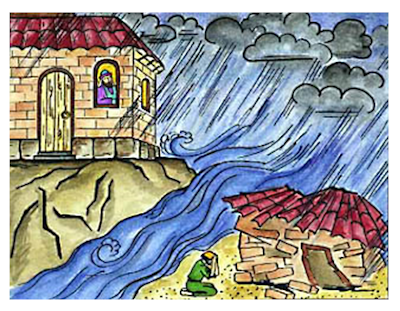 There's a parable Jesus told about a man who built his home on sand and when the storm came with floods and strong wind, his house crumpled and fell.  Another man built his house on the rock and it withheld all the storms and wind and flooding, and remained strong and intact.

The weird thing is, I haven't thought about that parable in over a year and the other day it just popped into my head.  So, I opened my Bible and read the entire chapter of Matthew 7, thinking perhaps God was trying to tell me something.

The last half of the chapter contains some of the harshest words Jesus ever spoke. Here's a brief summary,

Here are only a FEW other verses which say the same thing.

But be doers of the word, and not hearers only, deceiving yourselves  James 1:22

He who says he abides in Him ought himself also to walk just as He walked  1 John 2:6

You believe that there is one God. You do well. Even the demons believe—and tremble! James 2:19

And Jesus' own words:
And he who does not take his cross and follow after Me is not worthy of Me.  Matthew 10:38

These are pretty sobering words, aren't they?  They don't make for a very "seeker friendly" sermon, which is probably why I rarely hear a message on this in church.  I hear much about God's grace and mercy and how we can't earn our way to heaven. All true and good!  But aren't we deceiving people straight into hell by not giving them the rest of the story?

I really had to check myself after reading this chapter. Am I really wholly following God? Is He my first priority? Am I obedient to everything He says?  I'm not talking about the sins we all commit each day, our faults and failings, things that we are truly repentive of and God is working on in us. I'm talking about things that God has told us to do and we aren't doing them, or things in His Word that we know we should obey but we aren't.  I had to search my own life and ask God to reveal to me any area in which I was disobedient. Not a very fun exercise, I tell you. But Christianity is a serious business. It's not a social club, cool music, or a ticket into heaven for people who merely say a prayer and then live like they want.  This is heaven or hell serious. And God has made the requirements very plain.