A day early, but hey, I'm sure everyone will be busy tomorrow. 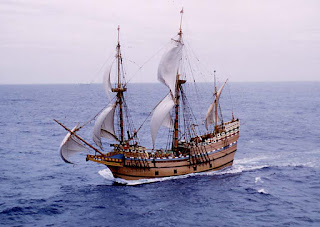 Why do we celebrate Thanksgiving anyway? Well, it all started on a tall ship!!  How about that?

The ship was called the MayFlower. It set off from England on September 6th 1620, but it was not an easy voyage, for they encountered storms in October that made them fear for their lives. They had to lower sales and drift off course or risk capsizing beneath the heavy winds. All in all, they sailed for 66 days until on November 9th, they spotted what is now Cape Cod. They anchored in ProvinceTown Harbor and spent the next month exploring the land before they decided to settle in Plymouth.

Who were these people and why did they make the long, arduous voyage? There were an estimated 102 passengers from England and the Netherlands. Most of them were fleeing religious persecution,
but some were farmers, hired hands, or servants hired by London merchants destined for the colony of Virginia.  Two wives on board were pregnant – Elizabeth Hopkins gave birth to a son Oceanus while at sea and Susanna White gave birth to a son Peregrine in late November while the ship was anchored in Cape Cod Harbor.

The ship was a 17th century English merchant ship with three masts and high castle-like structures fore and aft.  The passengers slept in very cramped, thin-walled, low-ceilinged cabins. No one over 5 feet tall would be able to stand up below decks.

The first year on land, including a harsh winter, was extremely difficult for the pilgrims, causing them to lose 46 out of the original 102.  But the following year provided a bountiful harvest, due in part to the help of local natives, so the pilgrims decided to have a feast to celebrate. 91 natives joined them in the celebration and hence, our Thanksgiving tradition began! 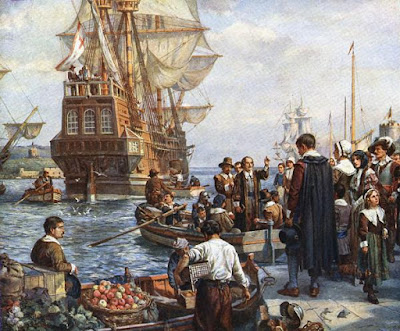 I pray you have a fabulous Thanksgiving with family and friends, because, I know we all have much to thank God for this year!