What is the Kingdom of God?

Recently, I started reading the Gospel of Mark and something struck me before I'd even made it through the first couple chapters.  There's an awfully lot of talk about the Kingdom of God.  So I did a search in the Gospels on the word "Kingdom" .  Did you know that Jesus mentioned the word Kingdom 122 times? At least in the New King James Version.  122 times!

Just for comparison sake, "Repent or Repentance" is only mentioned 22 times, "Save" 38 times, "salvation" 7 times.   Not that I'm saying that the Kingdom of God is more important than repentance or salvation. But perhaps we ought to pay more attention to what this Kingdom is all about since it seems to have been one of Jesus's hot topics!

I must honestly tell you that I've never heard a sermon in church about the Kingdom of God. What is this Kingdom? Where is it? Who is in it? And what is its purpose?

We know from Matthew 4:23 that the Gospel is connected to this Kingdom
And Jesus went about all Galilee, teaching in their synagogues, preaching the gospel of the kingdom,

In the beatitudes, Jesus lists numerous qualities of people who will inherit the Kingdom of Heaven

In the Lord's prayer, Jesus tells us to pray for the Kingdom to come here

We learn in Matthew 8 that apparently people can be cast out of this Kingdom into utter darkness
But the sons of the kingdom will be cast out into outer darkness.

Jesus tells several parables about the Kingdom of Heaven which are too many to list here, but give a great illustration of something so wonderful, people give everything to possess it.

Apparently one can inherit this Kingdom
Come, you blessed of My Father, inherit the kingdom prepared for you from the foundation of the world  Matt 25

Jesus told Pilate that his Kingdom was not of this world and he told the Pharisees that the Kingdom of God was within you.

Apparently, “We must through many tribulations enter the kingdom of God.” Acts 14:22

The Kingdom of God is "not eating and drinking, but righteousness and peace and joy in the Holy Spirit." Romans 14

Whee we receive Jesus as Lord we are automatically transferred into this Kingdom
He has delivered us from the power of darkness and conveyed us into the kingdom of the Son of His love,  Collosians 1:13

The Kingdom will be a real physical Kingdom on earth
“The kingdoms of this world have become the kingdoms of our Lord and of His Christ, and He shall reign forever and ever!” Revelation 11:15

In Summary. Here is what we learned from the above Scriptures


Kinda cool, huh?  But what is my point?  Merely this:  We need to start thinking in Kingdom terms!  Churches preach the Gospel, but how many preach the Gospel of the Kingdom?  When Christians start to realize that they are part of a Kingdom (now in the Spirit and later in the physical) it changes their perspective. Jesus and the Disciples didn't just preach salvation. They preached about the Kingdom of God.  I dare you to search through the New Testament for the term "Kingdom of God" or "Kingdom of Heaven" or "Gospel of the Kingdom"

I hear lots of salvation messages (And Praise God for it!)  But I never hear what we are being saved from  or what we are being saved to!  I believe if more Christians knew who they were in Christ now (part of His Spiritual Kingdom) and what their inheritance was in the physical Kingdom, they would be more bold about telling others! They'd be more excited about God and the things of God.  I'm talking Kingdom stuff here. Kings and Queens and palaces and knights and warriors and princesses and all the pomp and pageantry we all love about Kingdoms!

This is not just the stuff of movies and books. This is our future!! 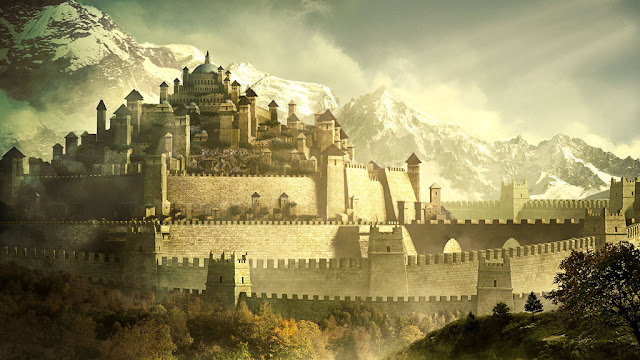