Happy New Year! And Quick review of Beyond the Mask!

2016!!!!!  Egad!!  How did that happen?  For someone born in the middle of last century, 2016 seems like the stuff of Science Fiction. Yet here we are!  And boy, has the world drastically changed!

Anyway, I'm hoping you all are having a great New Years day, eating, watching parades and football, hanging out with family, or just curled up with a great movie or book.

Hey speaking of movies, hubby and I watched one last night that I think you're really going to like!!  A friend and reader reminded me of this particular movie through a facebook message. I remember seeing the trailer awhile ago, but then I forgot all about it. This friend said that when she was watching the movie, it was like watching one of my books!!   Now, after seeing it, I agree. In fact, even my hubby commented that this was my kind of movie.

It's called Beyond the Mask! 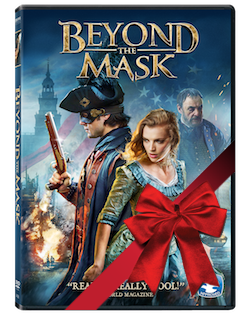 Without spoiling the plot, suffice it to say that it starts out with the hero, a hired assassin for the East India company, trying to get out of his profession and start a better life, but his employer has other ideas. One thing leads to another and our hero is nearly killed, left for dead, and blamed for a multitude of crimes he didn't commit. Near death, he is rescued by a woman who assumes he is her town's new vicar.  Now, imagine an assassin pretending to be a vicar!  Of course they fall in love but he is found out and ends up traveling to America to redeem himself with heroic good deeds.  Sound good so far?  We are only getting started.  Revolution is brewing in America and our hero gets involved fighting for the colonists and trying to thwart the plans of the evil man who had tried to murder him.  Okay, well I'll stop there, lest I give away the entire story. There's ships, sword fights, intrigue, romance, action... and best of all, the movie is a Christian film. The redeeming gospel message is evident but not preachy. Even my husband, who typically doesn't enjoy Christian films, said this one was pretty good! I thoroughly enjoyed it.

If you get a chance to see it, let me know what you think.

Have a Blessed New Year!!