If you missed the first 7 signs from two weeks ago, here's the Link.

If you missed the second 7 signs from last week, here's the link.

Now for the last SEVEN signs.


The Bible prophesies that in the end times a leader will arise who will unite the world in a one-world Kingdom. This man is called by many names in the Bible: The Assyrian, Son of Perdition, Antichrist, the Beast, man of sin, Lawless one, the mighty man, the violent man, deceitful one, etc...   He will unite the world and bring peace, but it will be a false peace.  He is spoken of in both Daniel 7,11 and Revelation 13, as well as by Paul in 2 Thessalonians, and other places throughout the Bible.

Never before in the history of mankind has there been so much talk about a global government. Plans have even been laid for such an endeavor at the UN.  World leaders are calling for a global government to help with the crisis of Climate control and terrorism.  Obama, Bill Gates, and even Pope Francis are calling for a one-world system.  Don't believe me?  Just Google "Global Government"

It is my personal opinion that this end time confederation of nations will be associated with the rising Islamic Caliphate. A short read into Muslim Eschatology (end times theology) reveals that their "messiah" is our "antichrist".  It's quite interesting but would take too much time here to go into. I suggest you do your own study, if you're interested.


This sign is the one that will most likely shock a few people. I'm not saying I completely believe this, but after doing intensive research, I thought it was worth mentioning. In Jesus's end time sermon in Matthew 24, he said the following

One of the biggest things that characterized the "days of Noah", besides rampant immorality, was the mating of fallen angels with human women, causing the rise of the Nephilim, which tainted human DNA. This was all part of Satan's plan to keep the Messiah from being born and one of the main reasons, I believe, God decided to wipe out all mankind and all Nephilim with them.

Genesis 6:1-5   describes this event and leads right up to the flood of Noah

Now it came to pass, when men began to multiply on the face of the earth, and daughters were born to them, that the sons of God saw the daughters of men, that they were beautiful; and they took wives for themselves of all whom they chose.
And the Lord said, “My Spirit shall not strive with man forever, for he is indeed flesh; yet his days shall be one hundred and twenty years.” There were giants on the earth in those days, and also afterward, when the sons of God came in to the daughters of men and they bore children to them. Those were the mighty men who were of old, men of renown.
Then the Lord saw that the wickedness of man was great in the earth, and that every intent of the thoughts of his heart was only evil continually.

Do you see how the Nephilim are somehow intertwined with God's anger and decision to flood the world?

So what does this have to do with end times?  Well, if Jesus said the days before His coming would be like the days of Noah, we should expect to see some Nephilim activity. I've done a lot of research on this.. so bear with me but I believe the extraordinary rise in UFO sightings in recent years is connected to Nephilim. There has been a significant rise in UFO sightings and in abductions in recent years. I know some of you are shaking your heads at me right now, but  I encourage you to do your own research. I believe these UFO sightings are either demons or Nephilim. And I also tend to believe they will play a huge part in the deception that the Bible says is coming upon the entire world.

17. Mark of the Beast Technology

...and that no one may buy or sell except one who has the mark or the name of the beast, or the number of his name. Revelation 13:17

The Bible describes a mark of some kind that the Antichrist will make people get who swear their allegiance to him.  Apparently people can use this "mark" to buy and sell.  Sounds like a chip of some sort, doesn't it?  In fact, many companies are already developing a chip that is implanted just beneath the skin that will have personal identification information on it, including bank information.  This kind of technology was not possible 50 years ago.
Google "Microchip human implant technology" It has already been approved by the FDA

This one is super interesting!
Judah Ben Samuel was a legendary and prolific German rabbi of the 12th century who made some astonishing and specific predictions about the future of Jerusalem and Israel that came true.
Here are some of his predictions that came true:

Prediction: In AD 1217 he predicted the Ottoman Turks would rule over Jerusalem for 8 Jubilees (A Jubilee is 50 years)   so 400 years
Fulfillment: The Turks took over Jerusalem in 1517 and ruled until 1917 when Allied Forces forced them out.

Prediction:  In the 9th Jubilee (Jubliee years happened every 50 years --see below for more info), Jerusalem will be a no-man's land
Fulfillment: From 1917-1967, The Holy land was under British mandate and belonged to no nation. Even after Israel became a nation in 1948, Jerusalem was split in two. The Jordanians controlled the east part and Israel the west. In 1967 Israel regained control of all of Jerusalem

Future prophecy!
Judah Ben Samuel also prophesied that during the 10th Jubilee Jerusalem would be under the control of the Jews and the Messianic “end times” would begin. If he’s right, the 10th Jubilee began in 1967 and will be concluded in 2017. 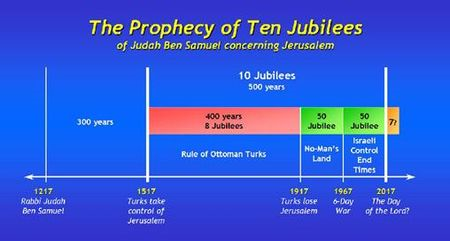 This is by far the most important sign. Why? Because for nearly 2000 years, no one could truly claim we were in the last days without Israel being a nation. When Jesus returns and places His feet on the Mount of Olives, it is to destroy the armies which are coming against Israel.

This particular prophecy is a special one to me because it is the prophecy that finally opened my eyes to the reality of God.   If you know anything of the History of Israel, you know that in 70AD the Romans destroyed Jerusalem and took all the Jews as slaves. As a result, Israel was no longer a nation and the Jewish people were dispersed throughout the entire world.

In Ezekiel 37 as well as elsewhere in the Bible, it is prophesied that one day God would gather all the Jews from all over the earth and bring them back into Israel and they would be a nation again. Mind you, this was prophesied 600 years before Israel even left the land.  NEVER in the history of mankind has a nation been annihilated and its people spread to every corner of the world and then 2000 years later, the people brought back and the nation restored with its original language and customs!! Think about it. It would be impossible without God.

Now that Israel is a nation again, the end-time clock has begun to tick!


70 is one of those cool numbers in the Bible. Just do a search in Bible Gateway on "seventy"

Here are a few of the important 70s


50 is another important number in the Bible. I'll let you do your own search. Serious, type in fifty in Bible Gateway and look through the entire Bible. A couple of the more important 50s are that Pentecost was 50 days after the Resurrection and Moses was up on the mountain 50 days to get the Ten Commandments. Fifty is the number of deliverance and restoration. It is the number of years in between the year of Jubilee in Israel. The Jubilee year was a year in Israel when all debt was forgiven.  Slaves were freed, property was returned and everyone took the year off and celebrated.

Jesus made an interesting statement about Jerusalem in Luke 21
And Jerusalem will be trampled by Gentiles until the times of the Gentiles are fulfilled.

Jerusalem was under Gentile rule until 1967 when Israel won the 6 day war and took over the city. 50 years from that day puts us in 2017.  One thing that interests me about Jubilee is the returning of land and ownership of land to the original owners. We all know that because the Jews for the most part rejected Jesus as their Messiah, the gospel was given to the gentiles.  But if you've read the Bible, you also know that God isn't done with Israel yet. They are still His promised people and His covenant with them can never be broken.  After Jesus comes for His church, God will deal with Israel and open their eyes to the truth of Jesus as their Messiah. In essence the Gospel baton will pass from gentiles back to the original owners, Israel. Sounds like a Jubilee year to me!

I hope you've enjoyed my 21 Top signs. May they bring you hope, peace, and joy as you await the return of Jesus. I did not post these to invoke fear in anyone, but instead to invoke excitement, anticipation, and a desire for holiness and to do God's will with the time we have left. Let us get more serious about our walk with God and stop playing church. May we not waste the talents and time God has given us.

Therefore we also, since we are surrounded by so great a cloud of witnesses, let us lay aside every weight, and the sin which so easily ensnares us, and let us run with endurance the race that is set before us, Hebrews 12:1

"Now when these things begin to happen, look up and lift up your heads, because your redemption draws near.”  Luke 21:28


I'm sure there are more signs to list but these are the ones I'm focusing on. Do I believe that Jesus will return in my lifetime (As I'm writing this, I'm 57)  Yes, I do.  I could be wrong, but I really don't think so. (Not predicting a day or hour... so please no hate mail)

The thing is, whether Jesus comes soon or not for another thousand years, each one of us only has 80 or so years here on earth. Some much less. So, in essence Jesus will come for you during your life time. The only question is, will He know you and grant you entrance into heaven or will he say "I never knew you, depart from me" and you end up in a very dark place without light or love or anything good for all eternity.

If you aren't sure where you'll end up, all you need to do is ask God to reveal Himself to you through Jesus. You must be sincere and sincerely want to know the truth. God will answer your prayer. Then all you need to do is believe in Jesus, receive the sacrifice He made for you on the cross, and submit your life to Him.  It's simple and can be done in a minute. A minute that lasts forever.

If you aren't sure and have questions or need someone to pray with, please contact me by pressing the "Contact Me" button at the top of this blog.