Have we been tricked into celebrating a Pagan festival?

I truly don't want to ruin anyone's Easter, but I've been doing some research on early Christianity and where some of our holidays originated and, well, honestly, what I've discovered has frightened me.

Did you know that Easter is a pagan holiday? It's roots are found in the celebration of the resurrection of the Sun-Goddesses' son, Tammuz.


Not long after the Global Flood, Noah's grandson, Nimrod, rejected the true God and became an evil ruler. He built many great cities and ruled over them. The most famous was Babel where the people tried to build a tower to heaven and become gods.  Nimrod brought much evil and perversion to the people. In fact, he married his own mother, Semiramis, who then became Queen. After Nimrod's death, Semiramis announced that Nimrod was the Sun God, the Life-Giver. Later he would become Baal, a god some of you may be familiar with from Jewish History in the Bible. Baal worship came to be associated with idolatry, demon-worship, human sacrifices and other evil practices.

Semiramis gave birth to a son, Tammuz, whom she declared was Nimrod's son, though he could not be. She claimed Tammuz was Nimrod reborn, the savior of mankind and even that he had been supernaturally conceived. The people also worshiped Semiramis as the goddess of fertility. Her other names were Ishtar, Ashtur, and Easter. 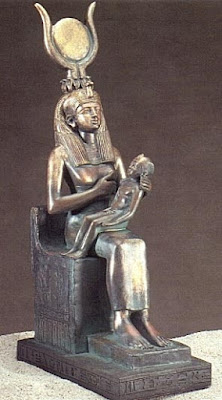 Unfortunately the savior, Tammuz was killed by a wild pig. The queen told the worshipers that when he was killed, some of his blood fell on the stump of an evergreen tree, and the stump grew into a full new tree overnight. This made the evergreen tree sacred by the blood of Tammuz.

She also proclaimed a forty day period of time of sorrow each year prior to the anniversary of the death of Tammuz. During this time, no meat was to be eaten.

Worshipers were to meditate upon the sacred mysteries of Baal and Tammuz, and to make the sign of the "T" in front of their hearts as they worshiped.

Every year, on the first Sunday after the first full moon after the spring equinox, a celebration was made.  It was Ishtar's Sunday and was celebrated with rabbits and eggs. Ishtar also proclaimed that because Tammuz was killed by a pig, that a pig must be eaten on that Sunday.

The truth is that the forty days of Lent, eggs, rabbits, and the Easter ham have everything to do with the ancient pagan religion of Baal Worship, and ultimately the worship of Satan.

How did they get incorporated into our celebration of Jesus's resurrection?  I need to do further research, but I believe it happened when Emperor Constantine of Rome made Christianity the state religion and many many of Rome's pagan religious practices became blended with Christian beliefs.

Now that you know the truth, it's up to you to decide what to do with it.  I don't believe we should take these things lightly.  I don't believe God does. Some will say "What's the big deal? We know the real meaning of Easter. What harm can some colored eggs do? Or chocolate bunnies?"  Maybe none.  But I'm not taking the chance.   In truth, I'm celebrating the Resurrection of Jesus Christ and nothing else.  Thoughts?